Dizzy Gillespie at Cornell in 1947 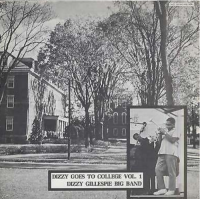 slideshow
In early October 1947, Billy Shaw, a partner in the Gale booking agency, announced in Downbeat magazine that client Dizzy Gillespie and his big band would be performing at Cornell University on October 18. Why would a big band that played bebop, not dance music, bother to travel nearly six hours northwest to Ithaca, N.Y., on roads predating the New York State Thruway? The answer is Marshall Stearns, an ardent jazz fan, writer and critic who was on staff at Cornell. According to Christopher Coady's John Lewis and the Challenge of “Real" Black Music, Stearns helped form the Cornell Rhythm Club, a university jazz club that invited Gillespie. The club arranged for a series of concerts and lectures that tied together jazz from the past with jazz from the present to demonstrate contemporary influences and to demonstrate that jazz, like all great art, was an ongoing, evolving story.

Gillespie first formed a big band to play his new form of music in 1946. Though he had led small groups in 1945, Gillespie was more passionate about heading up and soloing with an orchestra. His 18-piece band in 1947 was at its peak, playing experimental arrangements written by Tadd Dameron, Gil Fuller and George Russell. As Gillespie described his new bebop sound to Kaspar Monahan of The Pittsburgh Press 10 days earlier, “It's another way of phrasing and accenting. The accent is on the upbeat. Instead of OO-bah, it's oo-BAH. Different chords, too. And lots of flatted 5ths and 9ths. There's lots more to it. But just now, I can't think of what."

The songs were Cool Breeze, I Can't Get Started, Relaxin' at Carmarillo, Yesterdays, One Bass Hit, Salt Peanuts, A Night in Tunisia, Time After Time, Groovin' High (incomplete), Anthropology, Things to Come, You Go to My Head, Hot House, Lover Man, Toccata for Trumpet, Nearness, Mam'selle and Oop-pop-a-da. The lineup was fairly similar to the one Gillespie brought into Carnegie Hall a month earlier in September 1947.

What's fascinating about Gillespie's big band is that it sounds even better live than in the studio. This observation takes nothing away from the band's studio recordings for Musicraft and RCA, just that the band sounds freer with more room to stretch out. A four-minute Hot House is a good example or the seven-minute-plus Oop-Pop-a Da. Other Gillespie albums that illustrate my point are Showtime at the Spotlite (Uptown) from the summer of 1946 and the The Salle Pleyel Concert in Paris in July 1948. Of the three, I'd give the edge to the Cornell University concert in terms of taut power.

After the concert, Gillespie's big band performed at Boston's Symphony Hall and then returned to New York. In December, with the second American Federation of Musicians' second recording band due to go into effect in January, Gillespie was at RCA studios recording eight of his greatest works—Algo Bueno (Woody'n You), Cool Breeze, Cubana Be, Cubana Bop, Manteca, Good Bait, Ool-Ya-Koo, and Minor Walk. Oh to be at Cornell University in October 1948.