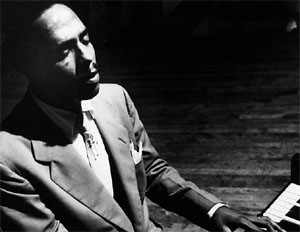 slideshow
Three years ago, Jessica Ferber called to tell me an incredible story. Jessica said that back in 2002 she was living in Burlington, Vt., when her roommate told her about a project she was too busy to take on. A local homeless shelter had contacted their former philosophy professor at the University of Vermont about a homeless man who had just died and left behind a ton of photographs he had taken. Many of them were of leading jazz artists in the late 1950s and 1960s, but there were plenty of New York folk artists as well. The material needed saving.

Jessica drove over to the shelter that day and began going through the boxes of photos. She was astonished. There were images of Bud Powell, Count Basie, Wayne Shorter and dozens of other jazz artists. The man who had died was Robert James Campbell (above), a little-known photographer who had freelanced in New York for the Village Voice and other publications. What grabbed Jessica was Campbell's ability to get his subjects to look into the lens and bare part of their soul.

From 2002 to 2012, Jessica worked tirelessly to archive his negatives and prints, identifying subjects and determining where the photos were taken. In effect, Jessica had stumbled upon a sunken galleon of work. When we spoke in 2012, Jessica was trying to raise money through Kickstarter to fund a book on Campbell and his images. She didn't have to ask twice. I posted about her efforts and gumption, and featured a Q&A with her explaining what she was up to (here). JazzWax readers related to Jessica's story and generously helped push her way over the top. I offered to write the book's forward. [Photo above of Connie Kay by Robert James Campbell]

To all of my readers who made a donation, I have good news. Today, Jessica's book is available on Amazon—nearly 13 years after she first opened that dusty box of Campbell's images. Through fearless determination, conviction and love of subject and beauty, Jessica pulled it off and saved a photographer's work from the incinerator. If not for Jessica, a slice of jazz history would certainly have been lost along with any notion of who Campbell was or why anyone should care.

Which should remind all of us that the art and music we enjoy today is often the result of one person who believes so strongly in an individual's work that they decide to champion it. This is as true of Orrin Keepnews as it is of Brian Epstein. In the case of Jessica, she became Campbell's advocate, despite never having met the man or knowing who he was prior to encountering his boxes of work left behind. As promised, I did write the forward. [Photo above of Philly Joe Jones by Robert James Campbell]

Art is like that. It's bigger than us, and the message it holds miraculously lasts forever, touching souls dozens of years later. Thanks to Jessica's efforts on behalf of Campbell, we have a finer sense of who these jazz musicians were and images that document their existence at different places and times. We also have images of a lost New York, when the pace was slower, people talked about ideas and lovers lingered on park benches. Congrats Jessica on a job well done!

JazzWax clip: You can see some of Robert Campbell's photography here. As you view the images, open another browser and listen to the music of Bud Powell: Here's I Remember Clifford (that's Campbell's portrait of Powell on the cover)...