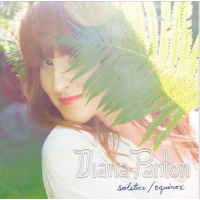 Yesterday, I finally worked my way through two stacks of incoming CDs that I had set aside for a listen. Among them was Diana Panton's new Solstice/Equinox. What a lovely surprise. Panton is a Canadian singer with a breathy, hip innocence reminiscent of Blossom Dearie. She also has great taste in songs. On her new 13-track album, Panton takes on the four seasons, starting with the green surprise of spring and ending with the bright orange of a winter fireplace. It's a clever approach that allows her to cover a wide range of music and moods.

On the album, Panton includes a clutch of familiar standards for those who want to hear something they recognize, including “Estate," “Manhattan," “September in the Rain" and “Tis Autumn". All are handled beautifully. The bliss begins when she takes on more off-beat material, such as Lerner and Lowe's “The Heather on the Hill", Freddie Hubbard and Abby Lincoln's “Up Jumped Spring," Joe Sherman and George David Weiss's “That Sunday That Summer, “Henri Salvador and Boris Vian's" La Fin Des Vacances, “Sophie Makhno and Barbara's “Septembre, “Marvin Fisher and Joe McCarthy Jr.'s" Cloudy Morning, “Patty McGovern's" I Like Snow" and the Jo Stafford holiday chestnut “By the Fireside." She sings the French songs in French.

Panton's voice is precious on each and every song. She's also fortunate to have such a superb group behind her. Don Thompson plays piano, vibes and bass; Reg Schwager is on guitar; Phil Dwyer plays saxophones and Guido Basso is on flugelhorn and trumpet. But wait, here's the best part: Thompson is so good and deep that he recreates the George Shearing Quintet's sound on the intros to many of the songs. He must have recorded himself first on piano, adding the bass next and finally the vibes before Schwager recorded his guitar on top. Thompson and Schwager are so tight, you barely realize there isn't a drummer on the album.

What makes Panton special is that she's herself. You feel her relaxed, playfully personality throughout, and the quality of her voice is remarkable. And I love the Julie London Calendar Girl feel to the 12-month theme Panton chose and her seasonal photos in the liner notes. Solstice/Equinox is a perfect album for the weeks leading into the holidays and beyond. A voice that's as gentle as a doe but smart as a fox. Brava!

For contrast, here's the George Shearing Quintet's version from 1949...