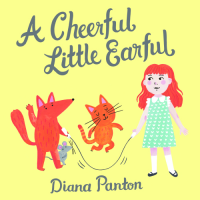 Diana Panton's voice is irresistible. It's not just that her phrasing is rich with mischief and joy. Or that she has great taste in songs and that she gleefully avoids tired songbook standards. For me, it's her sound and skills. She's always in pitch, no matter the risks taken with her voice, and there's a hip, girlish quality about her sound. Ever spend time watching kids fly a kite? That's Diana's voice, darting here and there way up high in the wind. Tremendously uplifting and fun, with just the right amount of jazz savvy sprinkled in.

Diana has just released a new album—A Cheerful Little Earful (Hamilton). Backed by the gorgeous duo of Reg Schwager (guitar) and Don Thompson (bass, piano and vibes), the pair manages to sound like the George Shearing Quintet on many of the songs, the perfect backing for Diana.

Songs include Happy Talk; It's a Most Unusual Day; “A" You're Adorable; Red Red Robin; I Don't Want to Live on the Moon; Cheerful Little Earful; If You Feel Like Singing, Sing; Music and Me; Pocketful of Miracles; Look to the Rainbow; In the Golden Afternoon; Experiment; Aren't You Glad You're You?; Sing a Rainbow, and Hush-a-Bye Island.

Don, of course, worked for many years with guitarist Jim Hall and guitarist Ed Bickert. Reg's recordings with Don date back to 1990. He also played on Gene Lees Sings Gene Lees in 1995. Both Don and Reg recorded with George Shearing on Christmas With the George Shearing Quintet (1998), a beautiful year-ender, and Back to Birdland (2000). Between Reg's solo albums and Don's, these gentlemen never recorded a bad album. Further proof that Canada still produces gorgeous jazz.

And here's Look to the Rainbow (dig the a cappella opening!)...