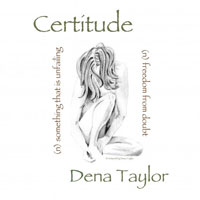 slideshow
Jazz Vocalist, Dena Taylor, has changed more than just cities with her relocation to Austin, Texas last year. The CD's title, Certitude, meaning “freedom from doubt" or “something that is unfailing, “ shows strong confidence in both sound and style and that confidence is well founded. This new pairing of Taylor with New York producer/musician, Matt Smith has introduced a new approach and a new life to the music she sings. It's fresh, edgy, stylish and, frankly, quite interesting!

Smoky, sexy, soft - the velvety voice of Dena Taylor dominates not just a corner of the room but indeed the entire wall of sound created by the “on" button of the stereo. And her voice on this new CD is the one thing that has not changed .. it's still the same singer who captivated listeners with her 2008 release, Round Midnight.

Taylor's road to success has been hard-won, even inspirational. Upon leaving the military, Taylor found herself in a violent car accident that left her with severe brain trauma - it took her a full two years for Taylor to regain her powers of speech and motion.

Today, Taylor lends her personal support to a number of good causes that support others who have endured adversity. It is a testament to Taylor's talent, however, that her sound never seems “preachy." Rather, the adversity Taylor has faced lends her voice a hard, knowing edge - like that of a Gladys Knight at her prime - that gives her music a ripened maturity so many pop stars lack.

Industry insiders who have heard preliminary tracks from Certitude think that this latest CD will not just boost Taylor's standing within the music community but is going to shine the spotlight on her producer, Matt Smith as well. A few eyebrows raised when it was heard that Grammy winner and internationally recognized guitarist, Redd Volkaert, would be guesting on two tracks. The surprise ends up being not that he's there but that he has been absent from the genre. His tracks work and bring even more spice and variety to this exciting CD. Taylor's time is coming and it will be in mid-January when her new CD is released.

This gifted American vocalist will be introduced and presented by Simon Adams of MyMusicSuccess to the attending members of MIDEM, the largest music conference in the world, being held in Cannes, Europe in January 2010. There is no doubt that she will prove the concept that music is, indeed, universal.

Shortly, advance copies of the CD will be made available for review by industry professionals and advanced sales will be announced as well. All information will be funneled through Taylor's website as well as continued updates via her Facebook Musician's page.