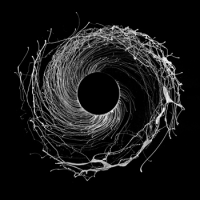 “An unplugged translation of contemporary electronica…state-of-the-art.” – Time Out NY

“Seriously never seen anything like these guys.” – Jad Abumrad, Radiolab

Thirsty Ear Recordings is excited to announce the release of Dawn of Midi‘s sophomore full-length Dysnomia, out August 6th, 2013. In celebration of the announcement, the Brooklyn-based trio has released an album trailer, available for posting HERE, giving a glimpse into their unique process and this singular, through-composed album.

Following 2010′s improvised debut First and their free, aptly-titled EP Live, Dysnomia is in many ways the first record that truly reflects the trio’s critically acclaimed live show, resulting in their most mesmerizing work yet. Mixed by Rusty Santos (Animal Collective, Owen Pallett, DJ Rashad), Dysnomia stands as a test of endurance and trust that involves bassist Aakaash Israni, pianist Amino Belyamani and percussionist Qasim Naqvi performing their compositions note-for-note without ever appearing the least bit predictable. If anything, Dawn of Midi’s sets are as red-blooded and rhythmic as a seamlessly mixed DJ set, casting spells on crowds in the same way the group’s favorite experimental and electronic acts have for decades.

Belyamani is quick to say that Dawn of Midi have followed their own internal logic since day one, largely thanks to the fact that they were friends first-playing late-night tennis matches in dimly lit parking lots well before they stepped into a studio or rehearsal space. As such, Belyamani admits its taken quite some time to shift from early improv sessions to the well-oiled machine that makes Dysnomia both a dizzying dance record and a deeply immersive living room listen.

“Playing a locked groove like we do on this record involves a lot of discipline and hard work,” he explains. “You don’t start out that way unless you’re a group of folk musicians from the same village.”

Forget being from the same village; Dawn of Midi’s respective families aren’t even from the same country. Belyamani was born in Morocco, where he “grew up in a culture where people do polyrhythms in their sleep.” A stateside move didn’t happen until he turned 18 and decided to study abroad at CalArts. Meanwhile, Israni relocated from India to Southern California when he was just four months old, and Naqvi’s parents left Pakistan before he was born in Connecticut.

“Both my parents are major music fans,” says Naqvi. “They love old Hindi songs from the black and white film era, and different kinds of traditional music from the South Asian subcontinent. So that stuff has definitely filtered through me somehow, but scales and rhythms from that part of the world are not something that are central to my musical thinking. At least not yet.”

That’s the thing about Dawn of Midi now that they’re based in Brooklyn and touring open-minded markets worldwide: As carefully cultivated as their aesthetic is, it’s also been known to incorporate, willfully and otherwise, such wildly divergent influences and interests as Aphex Twin, the Police, Can and Ms. Pac-Man. And when they really fall for a record-like they did with Dr. K. Gyasi after hearing his highlife hooks in Berlin-it quickly raises the bar of what they want from their own music.

Hence how Dysnomia ended up being recorded, mixed and mastered in its entirety twice. As Israni explains, “Late one night, I realized the record we had just made wasn’t the quantum leap we needed, so we started over. Then it was another year and a half of rehearsing and composing before we could go in the studio again.”

It shows. While the original version was semi-improvised like the trio’s critically acclaimed debut (2010′s First), the final 46-minute cut is a brooding balancing act between a fascination with structure and a desire to create their own definition of dance music. Set aside an hour to experience the multi-movement title track in full and you’ll hear what we mean, as a language only Dawn of Midi truly understands locks into one long, seemingly endless groove and mixer Rusty Santos makes sure every last high-wire hook hits you square in the chest, even the quiet parts.

“It’s interesting with this piece,” says Naqvi. “There’s actual music in the silences. You could almost take the negative space and make something completely different with it.”

“The spaces between the dialogues of the notes are filled in by the body of the listener,” adds Israni, “and they complete the circuit, leaving one option-to dance.”

About Dawn of Midi