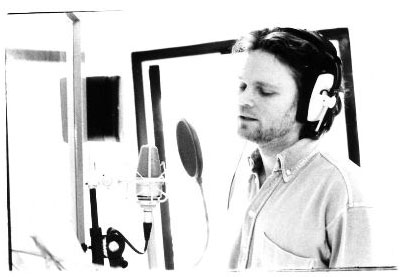 “DAVID TUGHAN DOESN’T SEEM TO BE FOLLOWING IN ANYONE’S FOOTSTEPS. IT’S RARE TO FIND ORIGINALITY OF THAT KIND IN A SINGER..." —The Observer, UK

David Tughan was born and raised in Northern Ireland. He moved to London in 1994 to study at The Guildhall School of Music and Drama. His passion for Jazz began at 13 when he encountered the Count Basie Orchestra in Florida. Inspired by the swinging energy and joyful sounds of the big band, David began listening to many instrumentalists such as Oscar Peterson, Stan Getz and Stephane Grappelli and was strongly drawn to singers such as Nat ‘King’ Cole, Chet Baker and Mel Tormé.

He began to sing in Jazz clubs in his early twenties, developing his “jazz chops”. At the end of his twenties, he made his first album, ”Just In Time”. This album was dubbed “CD of the week by the Guardian“(UK). David continued singing in jazz clubs and festivals throughout the UK and Ireland. Then, it was time for his second album, “Builders’ Brew”, featuring the Jim Mullen Organ trio.

His performances brought him to some of the great venues throughout London, the UK and beyond. Places like Ronnie Scott's, The 606 club, The National Concert Hall Dublin, The Royal Garden Hotel, The Waldorf Hotel, The Dorchester, The Grand Hotel Brighton, The Soho Theatre, Pizza Express Jazz Club Soho and last but not least, 59E 59th St Theatre NYC, New York.

Currently alongside his work with his own quintet in clubs and festivals in the UK and Ireland, David is singing with big bands such as the National Youth Jazz Orchestra (UK), the Skelton Skinner Allstars (UK), the RTE concert orchestra (Ireland) and Grammy award nominee John Wilson and his Orchestra (UK), famous for its contribution to Kevin Spacey’s film “Beyond The Sea” about the life of singer Bobby Darin.

David’s albums have been favourably reviewed in the Observer, The Times, Jazzwise, Jazz Journal, Jazz UK, Crescendo & Jazz Magazine, Musician Magazine, Jazz Rag, The Belfast Telegraph in the UK and in All About Jazz.