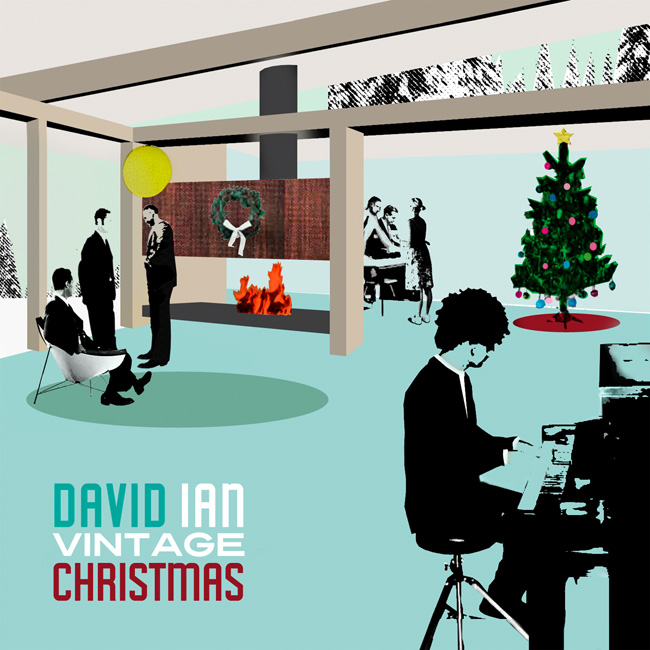 How does an ear-splitting, note-shredding rock guitarist who leaps off amps in concert end up releasing an album of mellow, jazz-oriented Christmas songs?

While most people would think such a scenario improbable, to say the least, David Ian views it as a natural progression in a multifaceted music career.

Born in Toronto, Canada to Armenian immigrant parents, Ian came early to music, beginning classical piano study at age five. A few years later, he experienced a moment of epiphany: “After seeing Back to the Future, I realized that playing guitar was my destiny. It really wasn't even a choice." Ian performed in a number of garage bands throughout junior high and high school, and after graduating from college became lead guitarist in the acclaimed band Church of Rhythm. That group eventually morphed into the even more successful rock group Superchick, which earned a Grammy nomination award in 2009 for best Rock/Rap Gospel Album.

But Ian was no one-trick pony, having begun a lifelong love affair with jazz in his early teens. He studied jazz piano with noted teacher Pat Pace, and joined with fellow students to help initiate the jazz lab curriculum at his high school in Akron, Ohio. When he conceived the idea of recording this Christmas record, he drew inspiration from two legendary jazz pianists. “I tried to capture some of the essence of the gorgeous voicing and phrasing of Bill Evans in his interpretations of ballads, as well as the festive approach of Vince Guaraldi, particularly his injection of the blues."

While dozens of Christmas albums are released each year, the most evocative ones are often those made by jazz musicians. This should come as no surprise, since the emotional primacy in the best jazz music echoes the spirituality inherent in the best Christmas songs. Jazz and Yuletide music have a long and complementary history, from Chet Baker's Have Yourself a Jazzy Little Christmas to Vince Guaraldi's A Charlie Brown Christmas to Wynton Marsalis' Crescent City Christmas Card.

Taking proud place in this music lineage is David Ian Vintage Christmas, which breathes new life into a set of familiar Christmas classics in relaxed, swinging arrangements that capture the spirit of the season while respecting the sanctity of the material. Rather than burying the songs under a wall of sound, Ian has opted for a small jazz combo that places the accent firmly on their melodic and lyrical content. In this beguiling blend of instrumental and vocal versions, the mood is intimate, the vibe is mellow, the sound warm and inviting.

Ian selected songs that have always given him the greatest feeling of Christmas, while managing to take them in fresh directions. A prime example is “Hark the Herald Angels Sing," which is typically performed in stately, hymn-like fashion. Ian, however, gives the beautiful melody an up-tempo jazz inflection. The song remains the same, but projects a completely new range of colors and shadings.

Ian was also careful to retain the songs' emotional core. The arrangement for “Santa Claus is Coming to Town" begins in a minor key that speaks to the difficult emotions many people feel during the holidays. Yet, as the tune develops, he imbues it with a sense of emotional lift and spiritual resolve. For “Silent Night," Ian evokes the poignancy of the first Christmas, painting a musical picture of the struggle of Joseph and Mary with a less literal, more implied melody.

“I believe the meaning of Christmas to be one of hope in someone greater than ourselves; in the birth of a Savior who ensures that the world need not bear its burdens alone. My objective with these arrangements is to help direct the listener to that sense of hope."

As the title of the record suggests, Ian sought to create a vintage sound, one that harks back to classic jazz and Christmas LPs of the 1950s. Hence, his decision to use a trio format (Ian on piano and guitar, Jon Estes on upright bass, Brian Fitch on drums) augmented by guest vocalists Acacia (of the sister duo Tal and Acacia) and Andre Miguel Mayo. “I tried to bring the arrangements within reach of the listener; I want them to feel like they're sitting by the fire in their living room listening to these melodically driven, mid-century arrangements. Each instrument, tone and note on this recording was purposefully chosen in an attempt to take the listener to that time and place."

Ian displays a light, inventive touch on his piano solos. His playing suggests Evans' singing melodic lines, but is invested with a personal conception of time and harmony and an effortless sense of rhythm. Like all good soloists, Ian keeps the song's melody close at hand even while spinning out free-flowing improvisations. He's equally adept providing support for the vocalists, each of whom brings a unique approach to the musical table. “The tone and character of their voices fit the arrangements like puzzle pieces," Ian says. “Their singing has the perfect blend of maturity and youth for this recording."

Acacia is blessed with a young/old voice that has something of Julie London's breathy quality, and she interprets the lyrics to these timeless songs with unadorned, old school reverence. Her knowing version of “Have Yourself a Merry Little Christmas" helps us reflect on good times past as well as the good times to come. Mayo's singing has a smoky, unconventional quality coupled with pleasingly off-center phrasing that foregrounds the playful and romantic lyrics to “Let it Snow." The two combine their complementary sounds for a spirited duet that closes the session.

In addition to covering much-loved standards, Ian wrote a Yuletide number that has a nice and easy swing that would be right at home on a classic holiday recording by Frank, Nat, or Bing. The jaunty “Christmas Time with You" was inspired by Ian's long-distance relationship with the woman who became his wife in 2009. The lyrics deftly capture the season's cold/warm dichotomy: “Christmas time with you, even though it's cold outside, we'll be all right. I'll be warm with you here, let's get together it's Christmas time."

It goes without saying that Christmas wouldn't be Christmas without all of the trimmings: a fresh-cut tree draped in baubles, bangles and beads, twinkling lights adorning eaves and windows, strategically placed mistletoe, a turkey in the oven and eggnog in the fridge. But it just doesn't feel like the holidays until you've got those familiar Christmas tunes spreading good cheer from your speakers. So deck the halls with boughs and holly. Roast some chestnuts by the fire. Walk in a winter wonderland. Be merry and bright. Be joyful and triumphant. And don't forget to include David Ian Vintage Christmas in your music rotation.

You're guaranteed to have yourself a swinging little Christmas.