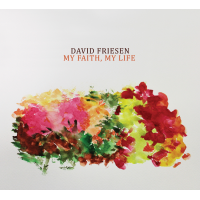 Friesen’s virtuosity brought him to prominence as a bassist nearly fifty years ago. He has remained one of the instrument’s most adventurous players through a career including associations with Duke Jordan, Marian McPartland, John Handy, Denny Zeitlin, Paul Horn and other major jazz artists. This two-CD album presents him on the first disc playing his compositions on the Homage bass, an instrument he developed. On some tracks in that CD he overdubs on the Japanese bamboo flute known as the shakuhatchi, which gives the music a ghostly exoticism. The CD featuring Friesen on bass has stretches of quietness but playing his primary instrument, Friesen’s celebrated energy is a major component in such originals as ”Long Trip Home,” “Sitka In The Woods,” “Martin’s Balcony” and, particularly, the album’s extended final track, “Lament For The Lost/Procession.” In that piece he incorporates the bass’s bowing and plucking capabilities along with electronic enhancements that become, in effect, a third voice.

On disc number 2, Friesen plays sixteen more of his original compositions, but on unaccompanied grand piano. Those selections are reflective in keeping with themes suggested by their titles, among them “A Light Shining Through,” “New Hope” and “Another Time, Another Place.” He gives his harmonic imagination full reign throughout that part of the program. The sound of the Ravenscroft grand piano is impressive. Despite a fair amount of online research, it is unclear to me why the Ravenscroft is described on some sites as a “virtual” instrument. It sounds like a full- fledged well-tuned grand.