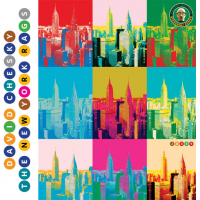 Artistic virtuosity and entrepreneurial vision rarely reside within the same person, but David Chesky has long ventured seamlessly between those two worlds. As a composer, musician and recording artist, three-time Grammy nominee Chesky bridges classical music, jazz and other genres, crafting a unique hybrid that he calls “Urban Orchestral” music. And as the founder of the audiophile label Chesky Records and, more recently, the high-definition audio download site HDtracks, David Chesky has made good on his quest to reproduce music of all genres in the most exceptional fidelity available.

“It’s all predicated on quality,” says Chesky of his dual role as creator and packager of music. “With the record company we develop the best technologies; that’s our mantra. And it’s the same with my music. I don’t try to write commercial music; I want to write something of value.” The New York Rags, David Chesky’s newest release, is the picture-perfect illustration of how artist and company consistently reach for—and attain—that “something of value” and present it in an über-pristine manner that routinely dazzles. The 18 tracks on The New York Rags, all written and performed solo by Chesky—and recorded using Binaural+, a Chesky-originated technique that captures high-resolution 192-kHz/24-bit sound with a special Binaural head for enhanced playback on both speakers and headphones—are at once both timeless and undeniably contemporary. “It’s basically ragtime on steroids,”says Chesky of the album. “We took something from the 1800s and made it into a 21st century art form. What I’m trying to do in classical music is make it relevant. Classical music was written 300 years ago for a king sitting on a throne 6,000 miles away. I’m trying to have it reflect New York City, to reflect that urbanism, the rhythm. America is a culture of jazz rhythms and syncopations and no one else in the world has that. So I use that in my music and I try to capture the soul of New York.”

The follow-up to last year’s String Theory—which Classics Today called “a wholly special sound world—quite unlike any other … darkly energetic, with flashes of electricity”—the idea to record The New York Rags came to Chesky “when I was walking in the park one day and said why not? I’m mostly into orchestral writing and I thought it would be fun to do a nice piano record.” But “nice” doesn’t necessarily mean polite. Each track—bearing Manhattan-centric titles such as “Grand Central Morning,” “The Coney Island Rag” and “The Thanksgiving Day Parade Rag in 7/4”—is compact but packed with crackling pianistic intensity: melodic twists and turns, complex harmonies and breathless tempos. “They’re short vignettes, pictures of New York,” affirms Chesky. “My other pieces are an hour long and I just wanted it to be fun and light and accessible to jazz and classical people.”

As impressive as Chesky’s own music is, however, it’s only half the story. What David Chesky and his cohorts at Chesky Records—his brother Norman was a co-founder and still works with David at the company—have built over the years is legendary among connoisseurs of top-shelf audio. Since its formation more than 25 years ago, Chesky Records has devoted itself to the pursuit of pure and honest sound reproduction, and that means continually upping the ante as new technologies have been introduced and integrated. With its huge catalog of reissues of classic albums and an equally impressive roster of original music—music falling into such disparate categories as Latin, blues, jazz, world, pop vocals, children’s music and, of course, classical—the Chesky operation has long been looked upon as a pacesetter by audiophiles. Most recently, the operation has branched out from physical media such as CD, SACD and DVD Audio to high-definition downloads under the banner HDtracks. Sampled at a much higher bit rate than music delivered in the common MP3 format, recordings available from HDtracks come as close to studio-quality as possible utilizing today’s available technology.

From Michael Jackson’s Thriller to Santana’s Abraxas, Josh Groban’s All That Echoes to Miles Davis’ In a Silent Way, from Andrea Bocelli to Keith Jarrett to Nirvana, the recordings available from HDtracks, uncompressed and otherwise unsullied, have simply never sounded this good. Three years in development, HDtracks is forcing even the most skeptical of audiophiles to think anew about the possibilities of downloaded digital music.“After operating Chesky Records for 20-plus years, we developed all these incredible ways to capture sound better,” says David, “and HDtracks is an extension of that idea. To hear a track downloaded from HDtracks on the computer is the best roller coaster ride in the world. There’s nothing that sounds better. No physical format such as CD, SACD and DVD Audio can approach it. If you listen to music while you’re vacuuming the house, HDtracks is not for you, but if you sit there and listen attentively and you want to hear the actual tone of a Stradivarius on a good hi-fi system, then it’s for you.” Ever looking forward, David Chesky—who recently became the 52nd recipient of the Lancaster Symphony Orchestra’s annual Composer’s Award—is already working on his next project. And typical of Chesky, there’s nothing typical about what he has on tap. “I just came back from Portugal and they did my ballet and we recorded it,” he says. “And I’m recording a symphony for rappers and orchestra—rap, whether we like it or not, is a folkloric, indigenous, living artform that reflects urban culture. So I decided to take it and kick it up a notch and put it with a symphony orchestra. I have the rappers learning the parts now. It’ll come out this summer.” He’s always been that way, he insists, his restless mind working a few steps ahead. “I remember having lunch with Mel Lewis of the Thad Jones-Mel Lewis Orchestra and he said, ‘If you get successful make sure you’re doing something you like because people are going to ask you to do the same thing a million times.” Chesky remembers, “I’ll never forget that. I can’t sit still. I can’t do the same thing. I’d get bored.”