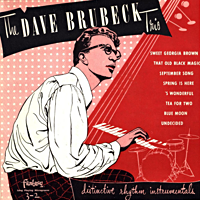 slideshow
In 1950, New York had the George Shearing Quintet, a group that Shearing harmonized by combining the voicing of the Glenn Miller Orchestra and the block-chords piano style of Milt Buckner. In San Francisco, the Dave Brubeck Trio was equally delicious to the ear. The trio consisted of Dave Brubeck (piano), Ron Crotty (bass) and Cal Tjader (drums, bongo, conga and vibes). Thanks to Tjader's versatility on percussion instrument, particularly the vibes, the trio sounded more like a quintet.

While Dave was studying at Mills College in 1946, he formed his first group, an octet. Known initially as Les Eight, the name was changed to the Jazz Workshop Ensemble and then the Dave Brubeck Octet. But the octet found itself in a bind. First, it couldn't find work outside of Mills College. The music was to far out there. Then the group's entire book of arrangements were lost in a flood when saxophonist Dave Van Kriedt took the book to Australia. Expenses forced Dave to start a smaller group. Dave picks up the story in liner notes to an album of his 1949 and '50 recordings:

When I decided to form a group that would be more economically feasible, my logical choice for drummer was Cal Tjader. Ron Crotty, who attended San Francisco State College with Cal, joined us on bass. I had the idea that once a trio was established I would go back to the octet by adding as many horns as the budget would allow. And, in fact, I occasionally did that for some engagements in San Francisco. The trio’s first club job was at the Burma Lounge near Lake Merritt in Oakland, and over the next six months we became the favorite jazz hangout for university students, one of whom was Carl Jefferson, founder of Concord Jazz Records.

Jimmy Lyons played our recordings on his late-night show, and on the strength of the initial response to those airings, he persuaded the KNBC program director, Paul Speegle, to give us a 15 minute once-a-week show. “Lyons Busy” as the program was called, could be heard the length of the West Coast and far beyond Hawaii into the Pacific. Many young people in the military who heard our broadcasts would subsequently come to see us when they passed through San Francisco.

Having to come up with new material for each show quickly expanded our repertoire. In the club we could improvise as many choruses as we wanted, and Cal, who was just learning vibes, developed rapidly as a soloist. But for radio and recordings, we were pretty much limited to the standard three minutes, which demanded from us some intricate arrangements and less reliance on the long improvisations that would later characterize the quartet. “Singin’ in the Rain” and “Undecided," two such tight arrangements with improvised choruses, were listed among the best records of 1950 in the Metronomes Yearbook—"Jazz ’51."

A number of the Trio’s early 78s were put on one LP in February l952, and the late Ralph J. Gleason, jazz critic and columnist for the San Francisco Examiner at the time, summarized in the album notes the Trio’s ascendancy:

“In the short space of two years, Dave Brubeck has risen from the obscurity of an unknown jazz pianist to a point where he is accepted in this country and abroad as one of the leaders of the modem school of musicians."

Read my JazzWax interview with Dave Brubeck starting with Part 1 here. The links to additional parts can be found at the top of the post above the red date.