SOURCE: ALL ABOUT JAZZ PUBLICITY
May 13, 2009
Sign in to view read count 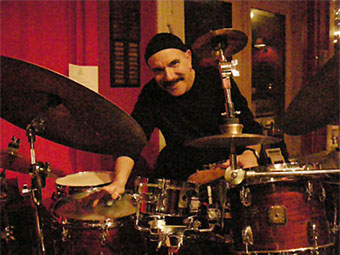 slideshow
ITM Records, a division of Jazzwerkstatt Records has just released a unique series of duets by saxophonist Dave Liebman and drummer Michael Stephans; however, rather than recording a series of saxophone-drums duets, Liebman and Stephans sought to do something very different. They each play seven instruments in addition to their main voices, including piano, pocket cornet, Tibetan singing bowls, alto-valve trombone, and voice. There are 14 duets that vary in time, from one to 14 minutes, which include compositions by both men, as well as Keith Jarrett, Harold Arlen, Duke Ellington, and others. Liebman and Stephans move easily from genre to genre to create some very personal musical colors. For those looking for something completely different, Nomads will not fail to please.

Michael Stephans leads three distinct but interrelated lives. As a college professor, he holds a Ph.D. in education, and two Master..s degrees, in English and education respectively. He and his partner Kathleen are currently living in a house in the woods of the Poconos in Northeast Pennsylvania. His new CD, entitled OM/ShalOM (featuring woodwind legends Dave Liebman and Bennie Maupin), will be released this winter (2007).

Michael has also been active as an award-winning poet, writer, and jazz journalist, often writing liner notes and promotional material for such luminaries as Bennie Maupin, Bob Brookmeyer, Darek Oles, and Bob Florence. His work has been published in many literary journals, and he has authored three books of poetry and fiction, with a fourth on the way; and he taught creative writing and jazz aesthetics classes at Pasadena City College. He currently teaches writing at Bloomsburg University of Pennsylvania.

In addition to his performance activities, Michael was awarded composition grants from the National Endowment for the Arts and the Percussive Arts Society. The former afforded him the opportunity to write a large ensemble piece called “Shapes and Visions" for the vibraphonist Karl Berger, which was performed at the Museum of Natural History in Washington, D.C.; and the latter gave him the opportunity to compose a solo work for drum set called “Downside-Up," which has been performed frequently at regional and national competitions, recitals, and festivals.

Michael is currently a member of SPATIAL EDITION, The NOMADS DUO (with Dave Liebman), TRIO FRIO (with Vic Juris and Francois Moutin), the BENNIE MAUPIN ENSEMBLE, Gene Perla's EASTON JAZZ EXPRESS, and other groups listed elsewhere on this page.