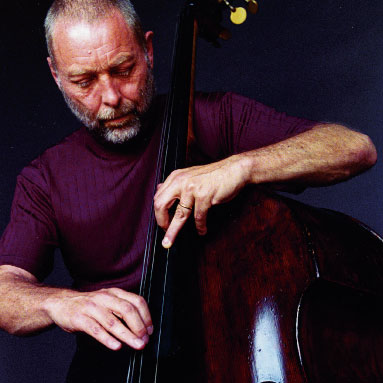 Parallel lives, parallel movements: through the streets of , and the jazz clubs of , the caves of and the flamenco bars of . Over strings and oceans and language barriers, masterful jazz bassist Dave Holland and Spanish guitar legend Pepe Habichuela have come together to unfold the beauty of flamenco on Hands (Dare2 Records; December 7, 2010), with collaborative takes on traditional and original compositions that let Holland's bass to sing with a new kind of soul.

Holland met Habichuela, the acclaimed scion of a deep-rooted Gypsy family from Granada, as part of a jazz- meets-flamenco pairing instigated by a Sevilla arts organization. It didn't take long, however, for to realize the depth of connection he felt with his new collaborator, who, like , had taught himself to play at a tender age. Holland picked up the ukulele as a boy in the Midlands, while thousands of miles away Habichuela practiced the guitar music he'd grown up hearing by sneaking up to the caves above his native city.

While realizing he'd met a musical soul mate, also fell for flamenco culture. It struck him as he sat with Habichuela and his exuberant extended family at a party in 's gypsy quarter, overlooking the Moorish castle, Al Hambra, after that first fateful encounter in Sevilla. “We had great flamenco music and food, a fire burning. It was a magical atmosphere, the culmination of everything," recalls fondly.

This culture resonates with jazz in unexpected ways, reflecting the parallel journeys of 's Gypsy and 's African musicians out of oppression and toward dignity and beauty. “I think the significance of the music for the culture is similar," reflects. “Jazz is one of the ways African American musicians were able to preserve their identity. It was a rallying point, much as flamenco is for the Gypsies."

Jazz and flamenco also share what calls the “aural transmission of music," the passing down through direct experience of complex forms and techniques, its subtleties and drama. dove into this hands-on approach with Habichuela, learning a new musical language and eschewing all thoughts of playing over Habichuela's parts or making mere fusion. I had no intention of putting Pepe in a jazz context and expecting him to play that way," explains. “So for me the real joy of this was to get into Pepe's world and absorb that."

Though Habichuela served as 's teacher and guide through the filigree forest of flamenco's regional variations and multi-section structures, also worked intensively to forge his own path, his own embrace of flamenco's distinct sound and spirit.

He felt his way forward in unique places, in the emotional power of great flamenco vocalists. Working with recordings and drawing on his years of experience and artistry, carved out a striking role for his instrument&#151and foregrounded the lyrical beauty and soul of what is often thought of as just about dance and fire.

“On the taranta on the album ('Camaron'), I'm taking the role of the vocal with Pepe accompanying me. I had heard the great flamenco vocalist Camaron sing it, and I knew I had to live up to that. At the same time, I didn't want to stray too far while finding my own way."

Though unexpected, the upright bass proved perfect for echoing the dynamics and ornamentation of flamenco's sometimes simple melodies. The glissandos and flowing trills that make flamenco lines what they are offered intriguing opportunities for improvisation, beyond the usual means of the solo. And in capturing the elegant embellishments of vocal lines, provides a gracious foil to Habichuela's practiced yet spitfire performances.

“When we finally performed that taranta and when I got the olé from Pepe, I felt like I had graduated," laughs. “Those olés aren't free."

At times daunted by the challenge of learning and teaching this wealth of structure and subtlety, Holland and Habichela—soon joined by Pepe's hip son Jocemi who's leaped into fame thanks to his flamenco fusion group Ketama—worked over three years to craft a body of work that honored flamenco's spirit while making room for gentle new perspectives.

“When Jocemi joined us, I felt I could bring in some of my music. Pepe is 100 percent flamenco. That's what he does, but Jocemi has a broad range of musical experiences and brought new possibilities to the group."

This openness shines through on two tracks brought to the project, such as “Whirling Dervish," which features Jocemi's fancy fingerwork. “Joyride" gives more room to flamenco's often unsung heroes, the cajon (wooden box) players and percussionists who get to cut loose on the track.

Yet the heart of the album—the pieces brought to the table by Habichuela and carefully transcribed and enriched by —is vibrantly flamenco, capturing the spirit glimpsed that night in and that Habichuela had lived and breathed since birth. A spirit that feels he now has the emotional depth and musical maturity to channel.

“I think fifteen or twenty years ago, I would not have been ready to do this project emotionally. I needed to reach this stage in my life to feel it," notes. “When it came, I really was ready to receive it and respond to the emotion requirements of the music, keeping an open mind and letting things resonate."

“I can now say that we are two Gypsies," Habichuela chuckles, “or better yet, he is a Gypsy and I am almost an Englishman."