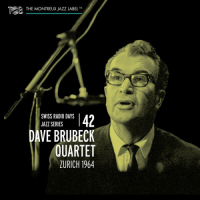 slideshow
In September 1964, the Dave Brubeck Quartet was in Zurich, Switzerland, on one of its countless tours of Europe. The group—Brubeck on piano, Paul Desmond on alto saxophone, Eugene Wright on bass and Joe Morello on drums—appeared at the city's Kongresshaus concert hall. Desmond's Take Five had become a massive hit for the group, and Dave was a crossover phenomenon, bridging the gap between jazz and the classical tradition. On the road to promote his Time Changes album, released in early 1964, Dave and Desmond once again delivered a live-performance one-two punch.

Dave often favored rocking the audience into a near-hypnotic state with his pounding classical-inspired, rhythmic chords. When he finished his tumultuous improvisation, Desmond would slip in and provide an impossibly seductive jazz solo on the high end of his alto register. This sparkling heavy-light change-up was in evidence during the Zurich concert, released recently on CD thanks to the TCB label as Swiss Radio Days: Dave Brubeck Quartet, Zurich 1964.

Dave opened the concert with Audrey, an original he wrote with Desmond and recorded 10 years earlier on Brubeck Time. The Zurich version is far superior, with its delicate, seductive touch and Desmond's feathery articulation.

Dave's Cable Car, a 6/8 waltz, was first recorded a year earlier in 1963 on Time Changes. On top of the restless melody, Morello plays brushes that emulate the sound of San Francisco's cable cars.

The first time Dave recorded You Go to My Head in 1946 with his octet, it was executed as an optimistic ballad. Here, the quartet gave it a medium-tempo, walking-bass reading, with Desmond breaking your heart on his breezy solo. It's one of the best recordings of the song.

When Dave launches into Take Five, the audience responds with a tidal-wave roar. It's a fairly standard reading, but Morello steals the show with his extended, tour-de-force drum solo, unleashing everything he has.

Koto Song was first recorded in the studio for Jazz Impressions of Japan in June 1964. Interestingly, Koto Song was the only tune from the album that became a standard. The album's recording began in 1960, following Dave's 1958 world tour for the U.S. State Department, which stopped in Japan, but had to be sidelined for a few years due to touring and other projects.

Pennies From Heaven receives a classic up-tempo treatment by the quartet, with Dave hammering out chords before Desmond jumps in with his parfait-like solo.

Morello's Shim Wa was first recorded by the drummer for his It's About Time album in 1962 but not released on the album. The 6/8 waltz also wound up on the Dave Brubeck Quartet's Time Changes album in 1963.

Dave's Dziekuje (or Thank You in Polish) is a bright tune with an Eastern European flavor. It appeared on Jazz Impressions of Eurasia in 1958 and is a lovely, up-tempo song.

Like many albums in the Swiss Radio Days series, this one is essential listening if you love the Dave Brubeck Quartet. The sound is clear and the playing extraordinary.