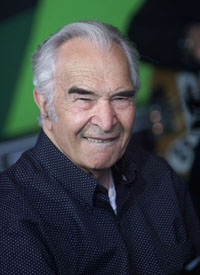 slideshow
Today, one year following Dave Brubeck’s death, a new website celebrates his life and music. And, we relay an announcement that one of the finest jazz repertory orchestras will broadcast a program of Brubeck compositions.

As John Bolger’s DaveBrubeckJazz.com debuts, the Irish Brubeck maven has unveiled an impressive site. In the “About” section, he outlines his ambitious goal:

The primary purpose was to detail the entire catalogue of Dave‘s music, recorded over eightdecades, so that fans, music lovers, collectors, musicians and historians would have a database of all of his music, in one site.

The secondary purpose was to compliment the Brubeck Collection, Holt Atherton Collections, at The University Of The Pacific, by providing biographical, image, media, video and memorabilia databases outlining Dave’s musical life, based on what was in my own collection and those gathered from other sources. I also hoped to highlight Dave Brubeck the person, who was intolerant of prejudice and used his music to advocate for civil rights and racial unity.

The site has extensive sections of Brubeck biography, news, photographs and links to blogs, books, academic collections and interviews. I found in browsing the sections devoted to recordings and videos, that a great deal more time had passed that I planned to spend. Consider yourself warned—or encouraged.

Bolger offers assurance that his is not the official Brubeck website, which can be found here.

As for that broadcast of Brubeck’s music, it will feature the consistently impressive Seattle Jazz Repertory Orchestra and be streamed live on the web this coming Sunday. Here is the announcement from Jim Wilke:

The Dave Brubeck Quartet was one of the primary groups moving jazz from the dance hall to the concert hall in the 50s. The cooler, more intellectual style of music found great success on college campuses and music departments (which previously discouraged it) started adding jazz to the curriculum.

The Seattle Repertory Jazz Orchestra, co-directed by Clarence Acox and Michael Brockman recently presented a concert of big-band arrangements of music by Dave Brubeck and Paul Desmond and highlights from that concert will air on Jazz Northwest on Sunday, December 8 at 2 PM (Pacific). Music includes:

In Your Own Sweet Way,
Three to Get Ready
Take Five
A Paul Desmond tribute medley featuring all five saxophonists from the SRJO
Blue Rondo a la Turk
The Duke
Theme from Mr.Broadway
plus an encore tribute to the late Frank Wess

Jazz Northwest is recorded and produced by Jim Wilke exclusively for 88.5 KPLU. The program airs on Sundays at 2 PM Pacific Standard Time and is available as a podcast at kplu.org following the broadcast.

The Seattle Repertory Jazz Orchestra’s next performance will be the 25th annual presentation of Duke Ellington’s Sacred Music Concert at Seattle’s Town Hall on December 28.