Celebrating ten years of highly individual music by the funk ensemble from Amsterdam with a live album featuring some very special guests. 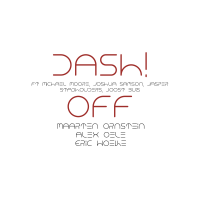 slideshow
DASH! Off is the fourth album of DASH!, the Amsterdam-based free-funk trio led by saxophonist-clarinettist-composer Maarten Ornstein. This new album was recorded live in Splendor Amsterdam, the city's most dynamic new music venue. DASH! Off offers five trio pieces and a 30 minute suite featuring special guests Michael Moore, Joost Buis, Jasper Stadhouders and Joshua Samson, all of whom have worked with DASH! before.

Inspiration for this new album comes from the likes of Ornette Coleman, James Blood Ulmer, Sonny Sharrock and Odean Pope, to name a few.

DASH! Off marks the band's 10th anniversary. Starting out as an octet in 2005 (with percussion and 4 singers) the band was re-formed in 2012 as a trio after a two year pause. Two octet albums were released; DASH! in 2006 and Bangalore in 2009. As a trio they released Lowpass Heroes in 2013.