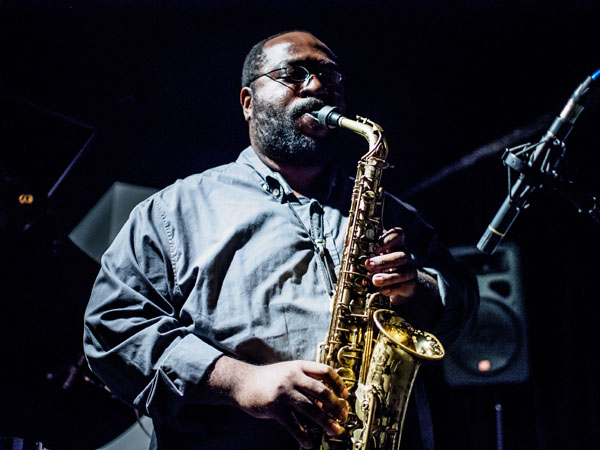 slideshow
On August 21, 2015, AUM Fidelity will release alto saxophonist-composer Darius Jones' new album, the 5th installment in his ongoing Man'ish Boy epic. This acclaimed series began in 2009 with his debut, Man'ish Boy (A Raw & Beautiful Thing), and shall be comprised of nine albums. This release arrives soundly at the mid-way point with aplomb. Le bébé de Brigitte (Lost in Translation) is performed by the Darius Jones Quartet featuring Emilie Lesbros.

As ever with Jones’ work, the compositional palette ranges widely here. From the new blues swagger of “Universal Translator” to the equally universal sense of great loss evoked in “I Can't Keep From Weeping” (as aching a ballad as Jones has yet written/recorded); from the infectiously swinging & (finally) unhinged cabaret dialogue that is “Chanteuse in Blue” to perhaps the deepest essence of the album (and platforms of intent) which are “Two Worlds, One Soul” & “Beneath The Skin”, a pair of extended works which evolve with the utmost in careful consideration to timing and gesture by all involved. The musicians who have manifest this work on record are: Darius Jones: alto saxophone; Matt Mitchell: piano & Rhodes; Sean Conly: bass; Ches Smith: drums & percussion; and French singer-lyricist Emilie Lesbros, whose own composition, “Quand Vient la Nuit” (here arranged by Darius Jones) closes and lyrically encapsulate the album: espousing no fear, in life, in art.

Jones' focus on the human voice in his current work was made wholly explicit on 2014's The Oversoul Manual, a tremendous achievement for any composer, with a luminous & full-house performance at Carnegie Hall to match. Responses from among those moved to listen & write: “Uncannily beautiful and riveting" (Will Layman, PopMatters); “Esoteric and enchanting" (Seth Coulter Walls, Time Out New York); “Absolutely striking .. downright masterful" (Steve Holtje, Culture Catch); “A contoured, formidable, signature work" (Britt Robson, JazzTimes); “Deeply affecting on both an emotional and a physical level" (Phil Freeman,The Wire); “One of the most ambitious albums made in the past decade. This simultaneously futuristic and primal work ranges from moving plainchant to mathematical counterpoint, from the most human of cries to the most alien of exhortations." (Andrey Henkin, The New York City Jazz Record).

The new character in Darius Jones’ Man’ish Boy cosmology being revealed here is Brigitte, the blind & love-blind mother of D’Troy·t (himself a character whose eminent wickedness will be revealed when Jones unleashes the final album of this middle trilogy). The name of mother Brigitte is in dedication to the French singer-performance artist Brigitte Fontaine, her work and ethos of pushing artistic boundaries, on her own terms, being a clear and abiding influence on Jones’ own creative trajectory. This new character is manifest on the album artwork by Jones' new creative partner, painter-illustrator Justin Hopkins.

Regarding a narrative underline, Le bébé de Brigitte (Lost in Translation) deals with difficulties in clear communication due to widely varied perspectives, the hazardous confusion that can result, and the essential effort to make sense of that confusion with a full-bore aim toward a new level of understanding, toward new levels of harmony. As Jones writes, “Much of the hatred and ugliness in the world comes from everyone trying to create a unison when they should be striving to create a harmony.” This elemental friction leading to frisson was in play during the album’s creation. Jones again, “In the process of creating this music, we often fell into moments of miscommunication because of differences in culture and language. I think this created a sense of mystery, and forced all of us to listen more deeply to each other’s nuances and subtleties, because we didn’t always have words to fall back on.”

This project will be presented at the 20th anniversary Vision Festival in July, and this album's release will be celebrated over two sets at Jazz Gallery, NYC on August 20th.