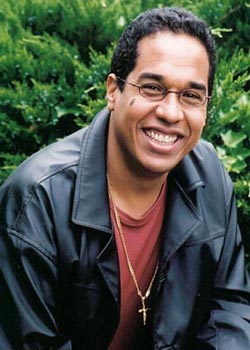 slideshow
In his work with the Wayne Shorter Quartet and with his own trio, Grammy-winning pianist Danilo Perez has been acclaimed for his Pan-American originality and musical fearlessness. On his new orchestral CD “Across the Crystal Sea," which was arranged and conducted by Claus Ogerman, Perez draws deeply on his lyrical gifts. Produced by Tommy LiPuma, with renowned engineer Al Schmitt at the controls, the new CD will be released by Emarcy/Universal on August 26.

The Panamanian-born pianist found “Across the Crystal Sea" to be the biggest challenge of his career--and one of its highlights. “It was a big test for me," says Perez. “My experience with Wayne has taught me to go to unknown places. But when it came to working with Claus, it was another kind of adventure. . . . As the musical director, he provided me with both a story and a landscape, and then told me, 'I want you to paint.'"

“Across the Crystal Sea" features Perez in a trio with bassist Christian McBride and drummer Lewis Nash, augmented by percussionist Luis Quintero. Vocalist Cassandra Wilson performs on “Lazy Afternoon" and “(All of a Sudden) My Heart Sings," the album's sole standards.

The remaining six tracks are Ogerman's, which he says are “based on classical themes I've known all my life and have always wanted to adapt and record." In addition to his original composition “Another Autumn," Ogerman drew on themes by Sibelius, Rachmaninoff, Massenet, Manuel de Falla, and choral composer Hugo Distler.

Producer Tommy LiPuma knew and loved Claus Ogerman's work with Antonio Carlos Jobim, beginning in the 1960s, and especially his “outrageously great" 1965 Bill Evans Trio album, “With Symphony Orchestra," “where Claus took classical themes and used them as vehicles for Bill to play on."

When LiPuma and Ogerman met in 1966, “we found a kinship with each other that started a 42-year friendship." They later collaborated on nearly a dozen projects, beginning in 1976 with the triple-platinum “Breezin'" and two other George Benson recordings; Joao Gilberto's 1977 classic “Amoroso;" three Ogerman solo discs, including “Cityscape" with Michael Brecker; “Sleeping Gypsy" by Michael Franks (1977); Dr. John's “City Lights" (1978); and Diana Krall's 2001 album, “The Look of Love."

In 2001 LiPuma, who'd already produced four CDs with Perez, approached the pianist about doing an orchestral album and at the same time sent Perez's recordings to Ogerman. “It took a few years, but Claus called me, told me how fantastic Danilo was and that he was starting to put some material together," says LiPuma. “We decided on the same formula as the Bill Evans album."

The ravishing results may be heard in “Across the Crystal Sea," a tour de force for Danilo Perez and, for his producer, “one of my personal favorites" from his own distinguished discography.

Currently, Perez is Artistic Director of the Panama Jazz Festival, which he founded in 2003, and President of the Danilo Perez Foundation, founded in 2005 to promote Panamanian art and culture. He serves as the Ambassador of Goodwill for UNICEF, Artistic Advisor of the Mellon Jazz Up Close series at the Kimmel Center in Philadelphia, and faculty member of the New England Conservatory and Berklee College of Music.