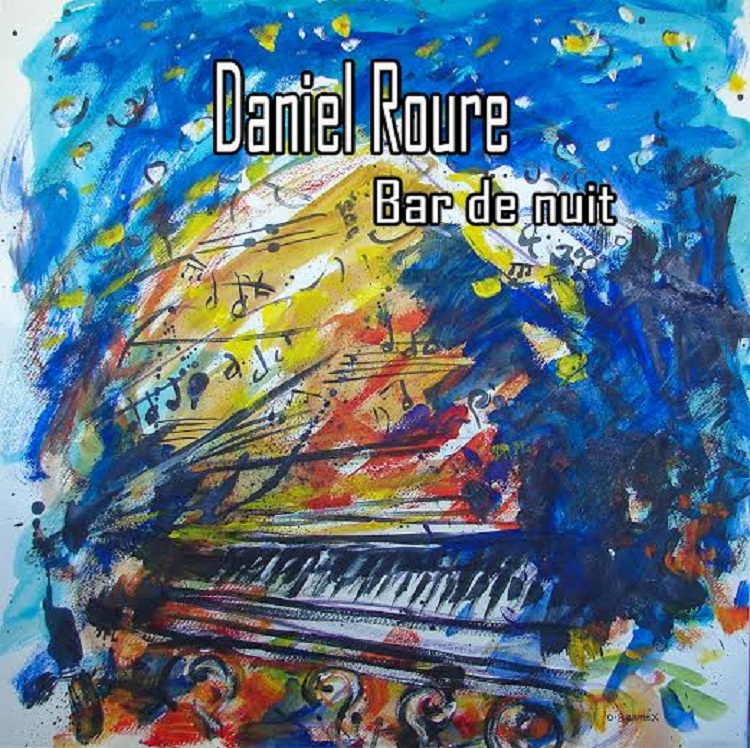 French cabaret, French pop and chanson have a long and rich history, from Edith Piaf’s classic recordings of the 1930s, 1940s and 1950s to the soundtrack of the 1966 film Un Homme et une Femme (A Man and a Woman). And in recent years, the chanson tradition has been kept alive by younger vocalists such as Amélie les Crayons, Coralie Clément, Camille Dalmais and Keren Ann. Some masters of chanson are from France, while others might hail from Belgium, Luxembourg or the Quebec province of Eastern Canada. Some chanson has a strong jazz influence, and there is no shortage of jazz influence on Daniel Roure’s excellent Bar de Nuit (which means Bar of the Night in French).

A veteran singer who was born in Marseille, France in 1948, Roure occasionally inserts English lyrics into his performances on this album. For example, a few English phrases are inserted on “Le Piano Jouait” and the Brazilian-influenced “Lily.” But those songs are mostly in French. At least 97% of the time, Roure sings in French on this album. And he has a pleasingly smoky vocal style that works well with the strong jazz influence whether he is performing at a slow, relaxed tempo on “Rien Ne Change” (“Nothing Changes”), “Un Bateau, Une Ile,” “Vous Mes Souvenirs” and “M’en Aller” or swinging passionately at a faster tempo on “Le Cirque” (“The Circus”), “Venez Ce Soir” (“Come This Evening”) and the bluesy “Arizona.” Roure is a skillful torch singer, and French lyrics serve him well when he is going for a torchy, dusky, noir-ish ambiance. But as “Le Cirque,” “Venez Ce Soir” and “Arizona” demonstrate, Roure also has a more energetic side. And on “Venez Ce Soir,” Roure gets his energy from chanson as well as from gypsy jazz. That track has an infectious swing beat, bringing to mind the gypsy jazz style that the seminal acoustic guitarist Django Reinhardt (a French speaker who was born in Belgium and lived in Paris) and his colleague, violinist Stéphane Grappelli, made popular in the 1930s.

When this album is playing, there is never any doubt that Roure’s love of jazz runs deep. On Bar de Nuit’s title track, Roure mentions the seminal alto saxophonist Charlie Parker (who, in the 1940s, brought bebop to the forefront of the jazz world). Roure also mentions Cole Porter (one of the great Tin Pan Alley composers of the 1920s, 1930s, 1940s and 1950s) on that selection, and when he is referencing those American icons, one is reminded of the impact that American culture had on French culture during the 20th Century. In fact, Roure’s publicity bio states that his musical inspirations range from French stars Yves Montant and Charles Trenet to American greats such as Nat King Cole, Dean Martin and Count Basie.

Roure employs a bossa nova beat on “Lily,” which is not unusual for a French-speaking vocalist. When the bossa nova movement exploded commercially in the early 1960s thanks to Antonio Carlos Jobim (who was exalted as “the George Gershwin of Brazil”), João & Astrud Gilberto, tenor saxophonist Stan Getz, guitarist Charlie Byrd, composer/guitarist Luis Bonfá and others, a lot of French- speaking vocalists in France, Belgium and Quebec were quick to incorporate bossa nova’s influence. And the fact that many of them didn’t speak Portuguese (which is Brazil’s official language) didn’t matter. A bossa nova beat and French lyrics can work really well together; parts of the soundtrack for Un Homme et une Femme made that abundantly clearly 48 years ago, and it is abundantly clear when Roure is singing “Lily.”

From smoky ballads to up-tempo swingers, Roure’s vocals have a great deal of character. And those who like their French pop, French cabaret and chanson with a strong jazz influence would do well to give Bar de Nuit a close listen.