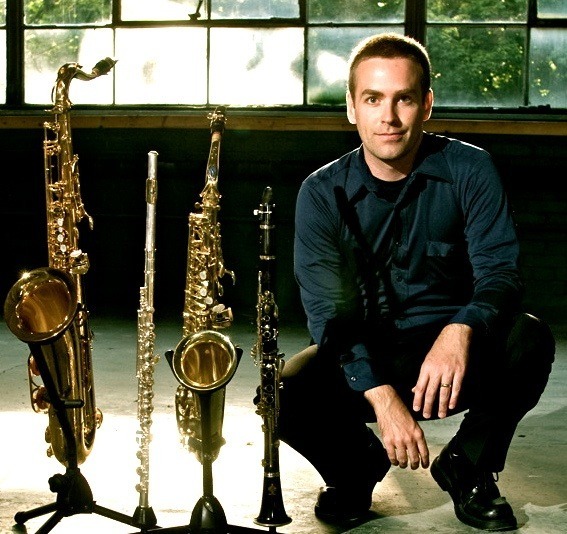 slideshow
Generously lauded in publications such as The Village Voice, The Boston Herald, The Boston Phoenix, and the Boston Globe, it's obvious that Daniel Bennett is the toast of his former town (he is now based in New York City). With a list of teachers that includes Jerry Bergonzi and George Garzone, it's easy to see why Daniel exhibits a unique voice and ninja-like control over his instrument.

Sharing concert billings with artists like Bill Frisell, Charlie Hunter, Greg Osby, James Carter, Billy Martin (Medeski, Martin & Wood), and Steve Kuhn, Bennett has created a sound all his own. His compositions feature folk melodies played on the saxophone in a jazz quartet format with a minimal harmonic approach much in the vein of Steve Reich and Philip Glass.

By 2007, the Daniel Bennett Group had reached thousands of listeners throughout the northeast while the critical acclaim began to pour in. With Peace and Stability Among Bears, his third release as a leader, Bennett takes his unique brand of trancelike improvised soundscapes to sublime new heights.

Doron Orenstein: What was it that inspired you to make music your life?

Daniel Bennett: I was inspired by my high school band director, Mark Borden. I went to a small public high school in Honeoye Falls, New York. It's a beautiful town in the Rochester area. I played saxophone in the jazz band, wind ensemble, and musical theater productions. I also played the saxophone in church three days a week! And like many high school musicians, I also played in a rock band. During this time, I learned guitar as well. To this day, I still write all of my music from the guitar.

DO: What do you find yourself practicing the most these days?

DB: I have recently begun playing through some of the great saxophone concertos by Glazunov and Ibert (among others). Even though I am a jazz player, I actually have a masters degree in classical saxophone from the New England Conservatory. Learning classical repertoire is an amazing way to strengthen your embouchure and develop a great tone. As for jazz, I am am constantly learning new tunes by ear. I also have begun various chord exercises to help develop a deeper intervallic language. I also double on flute and clarinet, so I dedicate some time to each of my woodwind doubles. There is a lot to practice! It never ends!

DO: What have you been listening to lately?

DB: I have been listening to Steve Reich's Music for 18 Musicians and Triple Quartet albums. I thoroughly love John Adams' Nixon in China. I have recently rediscovered Ornette Coleman's Art of the Improvisers. I also listen to a lot of electronic-based music like Joy Electric and Depeche Mode. Honestly, I will listen to anything with a great melodic hook! I don't care if it's pop music, jazz, or anything in between!

DO: What would you say is the skill or attribute that's helped you the most as a musician?

DB: Loving and supporting others above myself! Music can be a selfish endeavor. I am constantly challenged to put the needs of other musicians above my own. I also think it is very important to make music that will entertain people. The word “entertain" should not be a bad word. Unfortunately, jazz has alienated normal people. We have made the music into an academic “members only" club. This is both sad and pathetic. It is so important to entertain and uplift people. That should be our focus!

DO: What's the single best piece of advice you've been given over the course of your playing career?

DB: A wise man once told me that a musician should always strive to “worship God and serve the people!"

DO: What's the next musical frontier for Daniel Bennett?

DB: The last few years have been very busy for the Daniel Bennett Group. We have recently shared concert billings with artists like Charlie Hunter, Bill Frisell, James Carter, Greg Osby, Steve Kuhn, and Billy Martin. In addition, we have “crossed over" into the rock scene, sharing stages with artists like Denison Witmer and Joy Electric. My goal for the future is to continue performing full time with the band. Our quartet lineup features myself on alto saxophone and flute, Mark Cocheo on guitar, Mark Lau on bass, and Brian Adler on drums. We are based in New York City, but we do travel quite a bit.

DO: For those new to your music, which recording would you suggest they pick up?

DB: The Daniel Bennett Group has a brand new album out, entitled Peace and Stability Among Bears. The disc is the third installment of a musical trilogy that is centered around a fictitious bear. The music is original jazz, fused with elements of American folk and minimalism. My goal on the album is to treat the saxophone like a folk instrument. Each album in the trilogy has a thematic cartoon that is associated with our songs. Visual art and jazz! It was a very collaborative effort. Timothy Banks designed the new album. Banks has done some stellar work with Cartoon Network and more!

DO: What's your saxophone equipment setup?

This story appears courtesy of Best. Saxophone. Website. Ever..
Copyright © 2021. All rights reserved.