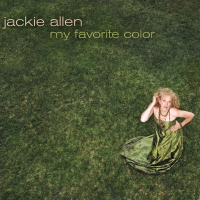 Tenth Overall Recording and First Studio Album in 8 Years Set For Release May 13, 2014

“Her gift is utterly distinctive and even innovative... a masterpiece. It's revelatory and sounds effortless." —Billboard

Long known for the enticing smoky quality of her voice and the natural sincerity of her interpretations, My Favorite Color is Jackie's long anticipated follow-up studio release to her 2006 Blue Note recording Tangled.

Oscar Levant and Mark Heyman's heartwrenching B"lame It On My Youth" opens with a gorgeous acoustic guitar introduction that folds gently into Jackie's profoundly authentic and wistful reading. The disc closes with Jackie's “Call Me Winter." The beautiful abstract lyrics were composed with lines shared by the late Illinois Poet Laureate, GE Murray. If you don't know where you are, you've arrived.

“Allen's voice is both crystalline and soulful; waxing romantic and poetic... this is four-hundred-dollar-a-bottle jazz—no cheap imitation." —Rolling Stone