My objective is to put the Galapagos in the limelight, raise funds and have a global conversation about the reality that we have local populations, that there should be a balance between conservation & tourist activity, which is how the islands mainly live, and it's always a fine line. &#151Cristina Morrison, Musician/Actor 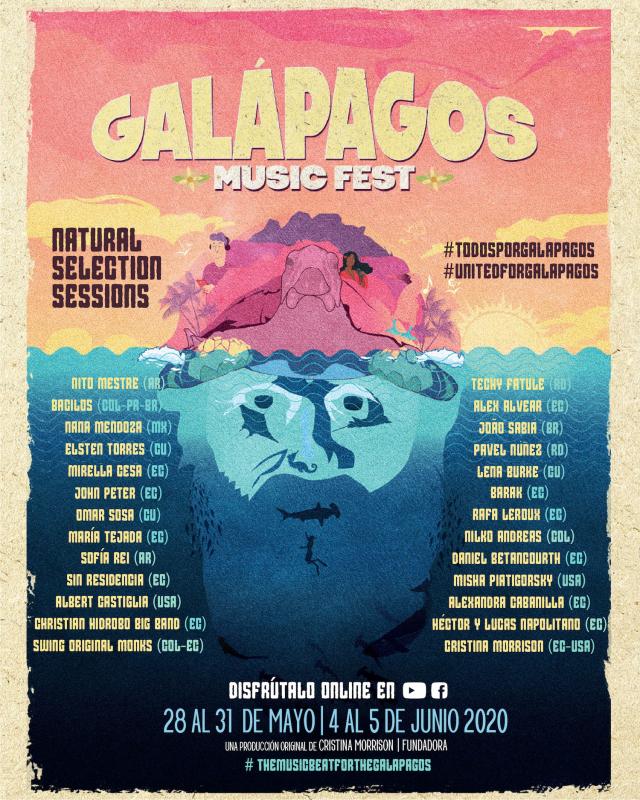 slideshow
New York based American-Ecuadorean singer & actor Cristina Morrison, went back to Ecuador in December to spend some time there and develop new projects but since March she has been caught living under a strict COVID-19 country lock-down installed by the government, including a curfew which starts daily at 2pm. As the whole country lives this, she has taken upon herself a necessary initiative and today she presents her latest production: The Galapagos Music Fest. It is officially announced and its first edition will be streamed ONLINE through Facebook and YouTube.

Through music and art, Cristina will raise funds for the campaign #UNITEDFORGALAPAGOS. This campaign seeks to support the approximately 3,000 residents of the Galapagos Islands (10% of the population) that are in mainland Ecuador and cannot return to their homes. As a result of the health emergency, all flights to the islands were cancelled in mid March immediately before these residents could complete their travel home. At the moment, these residents are looking at a phased return program under established strict health control protocols.

For the festival, Morrison has convened more than 25 artists, public figures, and influencers to support the objective. The artists line up who will contribute with their music and include: NITO MESTRE, Omar Sosa, Misha Piatigorsky, Sofia Rei, Mirella Cesa, Bacilos, Nilko Andreas Guarín, Alex Alvear, Hector and Lucas Napolitano, Lena Burke, Nana Mendoza, Daniel Betancourth, Maria Tejada, Albert Castiglia, Alexandra Cabanilla, Techy Fatule, Elsten Torres, Sin Residencia, and many more. The audience will be able to enjoy an amalgamation of genres like jazz, pop, singer-songwriter, classical, alternative, blues, bossa, rock, among others, and from artists from all over the world.

As part of the program, there will also be several talks with people that are expert in their fields covering themes like: sustainable development & tourism, national parks & conservation and well-being. The special invited guests include: Dr. Arturo Izurieta (ex-Director of the Galapagos National Park and Charles Darwin Research Station), Roberto Ochoa (Naturalist & Documentarian), Roberto Manrique (Actor & Activist), and others. Cristina will host the Fest as well as being on the line up for its closing day.

“My objective is to put the Galapagos in the limelight, raise funds and have a global conversation about the reality that we have local populations, that there should be a balance between conservation & tourist activity, which is how the islands mainly live, and it's always a fine line. It's a complex and difficult subject and there it should be faced with caution, intelligence, advice, and vision."

“I am working day and night to produce this festival with stupendous collaborators and support. Everyone is donating their time and creativity to the cause and that fills me with joy and gratitude" “In addition, I see myself continuing this Fest & project into the future because it combines my artistic activity with my love and concern for the Galapagos."

The Baroness, as she is known in and outside of the Islands, has been a permanent resident of the Galapagos for 25 years and the Festival is another effort as part of her social responsibility as an artist, focusing on the people, environment, & education.