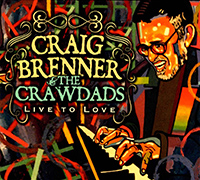 slideshow
Bloomington, Indiana's Craig Brenner & the Crawdads have a new CD, “Live to Love," that not only romps with boogie and blues, but also with jazz, R&B and even country in a delightful potpourri of ten original songs. Craig Brenner, leader of the group and composer, lyricist and arranger of all ten original numbers on the CD, is an exemplar of what can happen when formal musical training meets deep-inside soulfulness and creativity. Brenner graduated from Florida Southern College in 1970, then studied jazz piano with Wally Cirillo in Miami. Brenner attended the justly renowned Indiana University School of Music in Bloomington from 1976 to 1980, where he studied piano, composition and improvisation, then undertook additional study through a grant from the Indiana Arts Commission, studying boogie-woogie and stride piano under Bob Seeley and blues piano under Big Joe Duskin. He regularly performs solo as well as being a sideman in the roots-rock Ragin' Texans, and formed Craig Brenner & the Crawdads in 1985. Though there's been changes in the lineup of the Crawdads over the years, most of the Crawdads are on board on “" as a fine cast of musicians indeed.

Craig Brenner and the Crawdads, in addition to being a fine ensemble that sports horns, guitars and even vibes and accordion, is also somewhat of a family affair. Craig's wife Lori Brenner, newest member of the group, is lead vocalist, and delights with her beautiful, melodious voice that's filled to the brim with expressiveness. Son Nathaniel Brenner plays stand-up and electric bass and does backup vocals, while stepdaughter Antonya Wallace plays vibes and also does backup vocals. Craig Brenner himself, given his training, obviously plays piano, but also organ and clavinet, does backup vocals, and adds percussion.

Other Crawdads are guitarists Mike Baker and Gordon Bonham, one of the finest blues guitarists in Central and Southern Indiana. Tim Brookshire plays drums, congas and other percussion, Dena El Saffar plays viola, David Wierhake accordion, and T.J. Jones is featured excellently on funk guitar on the CD's “Homage to New Orleans" track. The dynamic horn section comprises Joe Donnelly on baritone and tenor saxes, Forrest Means on trumpet, and Dave Pavloka on trombone. The horn players unite on substantive ensemble work, but each is given ample space to do excellent solos as well. Craig Brenner himself also contributes solo work to “Live to Love", as we would expect, but is also a non-competitive accompanist as well, which is part of the solidity of Craig Brenner's arranging. For most of the tracks are ensemble affairs, and Brenner as arranger knows well how to incorporate solos and soloists to enhance, not egotistically compete, with the ensemble base.

Of the ten tracks on “Live to Love," four are instrumentals, with two of them boogie and blues piano pieces, and another one a funk-blues. These two piano pieces are Craig Brenner solos accompanied with drums, with his original compositions in boogie-woogie and blues piano and excellent craftsmanship on the ivories demonstrating that he is indeed the “fine and funky pianist" Living Blues magazine said he was. The first of these, “The Bloomington Breakdown," is a rocking boogie-woogie; while the second, “The Crawdad Shuffle," is an up-tempo blues that features an excellent blues guitar solo, probably by Gordon Bonham. The six-minute instrumental, “Homage to New Orleans," opens with the horns playing an ominous hymn, then breaks into 1970s funk-blues led excellently by T.J. Jones's funk-style guitar with special effects, ably abetted by sax and Craig Brenner on organ, where he is just as adept as he is on piano.

The opening track, “Hey Anna, Come Back to Indiana!" features a male vocal chorus developing this plaintive theme with counterpoint response from Lori, especially in the blues bridge in the middle of what is, overall, a 1930s boogie swing with the horn section complementing Brenner's boogie piano with a big-band sound. Lori Brenner's vocals are excellent on “Just One Glance, “ which is 1950s R&B with horns and viola accented by Craig Brenner's musical triplet piano riffing, as well as on “How Many Times?" a more contemporary blues-influenced R&B number.

That's the blues and boogie end of “Live to Love," which also features a variety of other musical approaches -- jazz, Bossa Nova, country. “I Live to Love" is an upbeat jazz samba reminiscent in its feel of Bossa Nova, while “Standing On My Own Two Feet Again" is a contemporary country number that prominently features David Wierhake's accordion. The last track, “The Garden," is a horn-and-viola-driven jazz instrumental with a Latin beat. The longest track on the CD is an eight-minute-two-second anti-imperialist screed set to modern jazz, “Loading the Boats to America." This is a song that works well both politically and musically, and is an impassioned call to the consciences of us here in the U.S. to become aware how much our material over-consumption comes at the expense of the poor in Latin America who produce the coffee and bananas we so love, and which expresses beautifully those truths found in John-Paul Sartre's “Silence is complicity" as well as in Che Guevara's “I can't help it if reality is Marxist."

Many of Craig Brenner's original boogie-woogie and blues piano compositions are available as sheet music. For more information, go to his website, www.craigbrenner.com. Visually enhancing “Live to Love" is the brightly colored painting by Joel Washington on the sleeve jacket of Craig Brenner playing piano, which Washington adapted from a photo by Jeff Hammond.

So there's a lot more to be found on “Live to Love" than just blues, boogie and R&B, but as I've indicated, the blues and boogie are ample, with excellent, original compositions that partake of other genres as well.

This review is adapted from my review of “Live to Love" in my August 23, 2009 “Blues and More" column that appeared in the online Bloomington Alternative.

Reviewer George “Blues Fin Tuna" Fish lives in Indianapolis, Indiana, home of blues legends Yank Rachell and Leroy Carr. He wrote a regular music column for two years called, “Blues and More" for the online Bloomington (IN) Alternative. He's also published in the regional Indiana blues and alternative presses as well as Living Blues and Blues Access, and wrote the notes for Yank Rachell's Delmark album, Chicago Style. He has also published on blues and pop music for the left-wing press as well, and has appeared in Against the Current and Socialism and Democracy, as well as the online Political Affairs and MRZine.