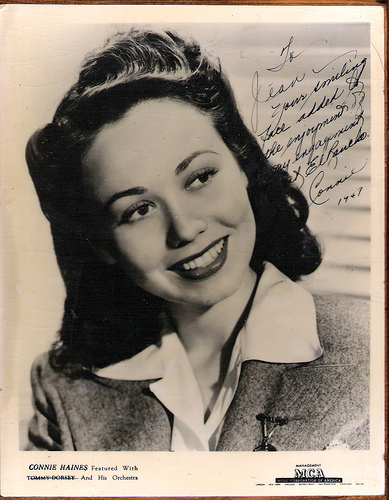 Connie Haines, a petite and dynamic big band singer who performed alongside Frank Sinatra in the Harry James and Tommy Dorsey orchestras

Haines died Monday in Clearwater, Fla. The cause of death was myasthenia gravis, an autoimmune neuromuscular disease. She was 87.

Haines was best known as a singer with a knack for rhythm, and many of her most successful recordings -- 25 of which each sold more than 50,000 copies -- featured her crisp, swinging vocal style. When Dorsey first heard her in action with James at Frank Dailey's Meadowbrook, New Jersey's temple of big band music, he reportedly asked, “Hey, little girl, where'd you learn to swing like that? And when can you join my band?"

It didn't take long. Haines recorded “Comes Love" and “I Can't Afford to Dream" with James, revealing a capacity to handle lyrical ballads as well as jitterbug specials, before moving to the Dorsey organization with Sinatra.

James, however, was not fond of Haines' birth name -- Yvonne Marie Antoinette JaMais -- suggesting that it would take up too much space on a theater marquee. “You don't look like an Yvonne," he said, “you look like a Connie." And “Haines" was chosen, apparently because it was a close rhyme to “James."

Haines quickly made the name her own, however, establishing herself as one of the prime female singers of the big band era. Many of her hit songs were the product of a warm musical partnership with Sinatra via tunes such as “Oh, Look At Me Now," “Let's Get Away From It All," “Friendship," “I'll Never Smile Again" and the jaunty rhythm tune “Snooty Little Cutie."

She appeared with the Paul Whiteman Orchestra when she was 10, won a Major Bowes amateur contest and was heard on the Fred Allen radio show while she was still in her early teens. By 1939, Haines -- at age 18 and slightly less than 5 feet tall -- was singing alongside Sinatra in the Harry James Band.