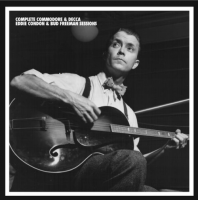 slideshow
On the Arts in Review page of today's Wall Street Journal, I review Eddie Condon & Bud Freeman: Complete Commodore & Decca Sessions, a new 8-CD box from Mosaic Records (go here). I must say, I was floored by the recordings. As most readers know, I've long been a dogmatic, self-proclaimed fan of post-1945 jazz individualists who insisted on standing out with distinct artistic voices. Conversely, I had little interest in or patience for moanin' instrumentation or frantic sound or tempo of pre-war jazz. This boxed set turned my head completely around.

First, the sound. Andreas Meyer has done a miraculous job detailing the music and freshly mastering the material. Every single track sounds like it was recorded last week in the world's finest studio. Second, the music. As I note in today's WSJ, this hot style served different purposes, depending on the decade. In the late 1920s, it was speakeasy music. In the 1930s, it was meant to raise Depression-era spirits. In the 1940s, it was a respite from bop's new modernism. In the 1950s, '60s and early '70s, Chicago jazz was a roots music that let older jazz fans return to an era with which they were most familiar. And third, the liner notes. They are by Dan Morgenstern and are a masterpiece of writing—integrating history, personal experience and storytelling. If you don't know much about Chicago jazz, Dan's notes bring the style to life.

What's particularly special about this box is the narrative. In the late 1920s, a number of the young musicians associated with Chicago's Austin High Gang moved to New York for the expanding opportunity in recording, radio work and performing. Condon and Freeman made the move in 1928, and between 1938 and 1950 (the years covered by the box), they spearheaded a movement to keep Chicago Jazz alive and well in the city.

What about the music? Oh man, all 199 tracks cooks. Condon's guitar chugs along and Freeman's tenor sax gets more and more slippery. My foot was going the entire time. The music is a bit different than you're used to. You have multiple instruments playing at once with different ones exploding in solo at different times. And solos are always sizzling. Most fascinating of all is how so many musicians can move in unison and contrapuntally without tripping over each other.

This is a must box without an ounce of filler. But rather than go on and on, I've included three tracks that knocked me out. The stuff is like horseback riding on a trampoline.

JazzWax clips: Here's Love Is Just Around the Corner.

Here's It's Tulip Time in Holland, with Jack Teagarden on vocal.

And here's The Way You Look Tonight.