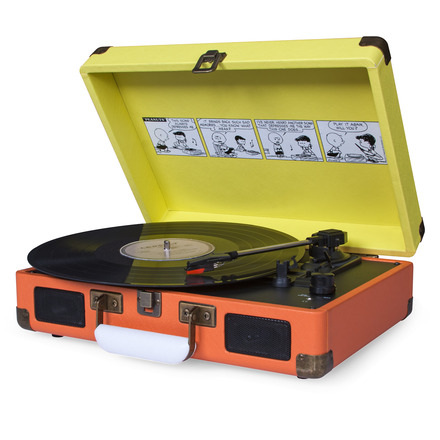 LOS ANGELES, Calif.—Fantasy Records, via Concord Music Group, is pleased to announce a collaboration with select record stores to sell an exclusive accompaniment: a remastered vinyl reissue of Jazz Impressions of a Boy Named Charlie Brown featuring the Vince Guaraldi Trio (available separately on May 13, 2014), paired with Crosley’s PEANUTS Cruiser turntable. PEANUTS fans and record collectors can purchase this limited-time pairing beginning on May 25, 2014.

The history of A Boy Named Charlie Brown is an underdog story worthy of its namesake. In 1964, TV producer/director Lee Mendelson was coming off the success of his documentary, A Man Named Mays, profiling San Francisco Giants center fielder Willie Mays, when he decided to turn his lens on another famous ball player: the hapless but resilient star of the PEANUTS comic strip, Charlie Brown.

The result was a 60-minute documentary about PEANUTS creator Charles M. Schulz, scored by San Francisco-based jazz musician Vince Guaraldi. Due to the whims of network programmers at the time, A Boy Named Charlie Brown never aired. Nevertheless, Fantasy Records forged ahead with the release of the documentary’s soundtrack without the cross- promotional support of its television counterpart. One of the album’s original tracks, “Linus and Lucy,” made its way to prime-time television a year later on A Charlie Brown Christmas, which aired on CBS in December 1965.

Remastered by acclaimed engineer Joe Tarantino, Jazz Impressions of a Boy Named Charlie Brown has been brought back to life for its 50th anniversary. Concord has carefully restored the contents of the original LP with a special twist: orange vinyl.

Crosley Radio, known for their vintage style and unique turntables, has also drawn inspiration from the beloved PEANUTS characters and music, producing a special edition of the popular Cruiser portable record player. Initially created for Record Store Day 2014, the first run of product proved to be a popular one, selling out in many stores on its day of release. To satisfy consumer demand, the turntable will be available throughout 2014, exclusively at Record Store Day participating stores, and makes the perfect companion piece to Jazz Impressions Of A Boy Named Charlie Brown beginning May 25th. The lightweight, three-speed PEANUTS Cruiser comes in Charlie Brown's signature yellow and orange, with reproductions of Schulz's cartoons on the leatherette-bound cover. Built-in stereo speakers and a headphone jack allow for classic tunes like “Linus and Lucy" to be played and shared anywhere!