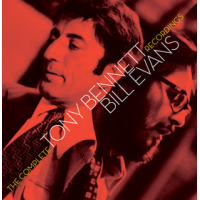 slideshow
The Complete Tony Bennett/Bill Evans Recordings Due Out April 28.

LOS ANGELES, Calif. — Forty years ago, renowned entertainer Tony Bennett joined together with legendary jazz pianist Bill Evans for their first of two duet albums. The result was 1975’s The Tony Bennett / Bill Evans Album, followed by Together Again the following year. To celebrate this incredible coupling of talents, Fantasy Records, a unit of Concord Music Group, will release a deluxe, 180-gram vinyl box set. Venerated as a special moment in the history of jazz, the two albums, plus two discs’ worth of alternate takes and bonus tracks, are combined in this four-LP, 180-gram vinyl collection, The Complete Tony Bennett/Bill Evans Recordings. Included is a collectible 12x12 photograph of the two musicians, as well as a deluxe 12-page booklet featuring rare images and extensive liner notes by Will Friedwald (co-author of Tony Bennett’s autobiography, The Good Life).

This unique pairing began with 1975’s The Tony Bennett / Bill Evans Album, recorded during an intimate session at Fantasy Studios (producer Helen Keane and an engineer were the only other people present). At work in equal partnership, Bennett and Evans selected the tunes, worked out the arrangements semi-spontaneously, and, later, picked the final takes to be used. Bennett recalls that the pair didn't even discuss song choices before the session: “I would name a tune, and Bill would say, ‘That's good, let’s do that.’ We'd find a key and then the two of us would work it out.”

The Tony Bennett / Bill Evans Album features a selection of classics from the Great American Songbook (“The Days of Wine and Roses,” “Young and Foolish,” “The Touch of Your Lips”), as well as a moving rendition of the Evans’ classic tune “Waltz for Debby" (with lyrics written by Gene Lees). A consistently enthusiastic and balanced musical team, Bennett and Evans shine both individually and in tandem.

Following the recording, the pair performed live on a number of occasions and made several television appearances, including a stop on Johnny Carson’s Tonight Show.

In 1976, Bennett and Evans returned to the studio for Together Again. Another low-lights, high-improv date of standards that opens with an Evans solo rendition of “The Bad and the Beautiful” and continues with such moving renditions of “Lucky to Be Me,” “You’re Nearer,” and “You Don't Know What Love Is.” Another Evans original, “The Two Lonely People” (with lyrics by Carol Hall), also graces the playlist.

Both sessions—in which Bennett and Evans recorded together in the same room, not in isolation booths (a recording preference that Bennett has practiced throughout his recording career)—yielded several fine alternate takes that are included, as well as bonus tracks from the second date.

With such palpable energy and nearly telepathic interplay, these recordings have garnered critical awe over the years since their release. London’s The Guardian noted in 2009, “The outcome of this intimate duet highlighted the sublime creative accompanist in Evans, and the deep jazz sensitivities of the vocal legend... the two sound as if they’re having the time of their lives.” The BBC mused, “It seems impossible that these two giants of understated musical sophistication went into the studio with no idea of what they would record... They plucked one definitive performance after another out of thin air to produce a nine-track album—called, with straightforward simplicity, The Tony Bennett / Bill Evans Album—that was bettered only by its solitary follow-up, the following year’s Together Again.” AllMusic simply called the collaboration an “excellent jazz-pop hybrid in which both musicians were shown off to advantage.”

The Complete Tony Bennett/Bill Evans Recordings joins several recent and forthcoming releases, celebrating the career of Bill Evans. Aside from a handful of reissued albums on vinyl, fans can also look forward to CD box set reissues The Complete Riverside Recordings and