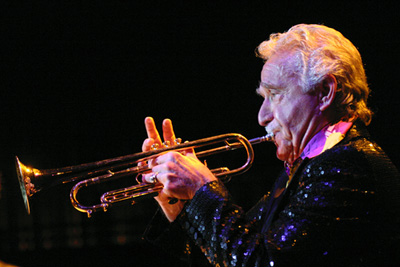 slideshow
One unfortunate phrase that is too often uttered when referring to older jazz musicians who come to town for a concert is “You better go see them now, because you never know if you will have the chance to see them again."

While legendary trumpeter and bandleader Doc Severinsen is 83 years old, I find that phrase hardly applicable after seeing him in concert at the Kirkland Performance Center on October 16th.

Not only are Doc's chops still in good shape, but the rest of him seems to be just as strong.

After retiring to Mexico, Doc heard guitarist Gil Gutierrez and violinist Pedro Cartas, who head up the band El Ritmo De La Vida, and immediately knew who he would be spending the next few years with touring and recording.

For those who associate Severinsen with big bands, this setting would surprise you. The show featured a quintet with a repertoire of everything from gypsy jazz, music with a heavy influence from Spain and South America, and jazz standards.

Many of the arrangements were done by Gutierrez, who is a world class guitarist, and were absolutely beautiful. The incorporation of the trumpet into these tunes was seamless, not only because of the arrangements, but because of Severinsen's ability to adapt to the feeling and mood of each song.

There are some things about Doc that haven't changed. On stage he remains incredibly witty and mobile, hopping up out of his stool and constantly cracking jokes. His wardrobe hasn't slowed down either. In the first set he showed off a wildly printed collared shirt with purple pants and black and white striped socks. The second set boasted a pink blazer with black lace, and pink leather pants, which he stated that “every woman in the audience would die to own a pair."

His range on the trumpet, as well as the speed of his fingers were still impressive, but what was truly mind-blowing was how great his tone still was. Severinsen boasted long, full lines with pitch that didn't waiver in the high register.

I didn't walk away from the concert worried that it would be the last time I would see Doc. He presents the attitude that he doesn't feel like aging, and his body seemed to accept that.

Even if he does retire again sometime soon, he jokingly invited the whole audience to visit him in Mexico, where and the band would play host. Something tells me that I, at 31 years old, might have a tough time keeping up with him down there.

An Interview With Doc Severinsen