Concert And Album Signing - Minas Celebrates "Record Store Day" With The Reissue Of "Num Dia Azul", From 1983, On Vinyl And CDs

On April 16th, Philadelphia will have a chance to hear composers Orlando Haddad (guitar and vocals) and Patricia King (piano and vocals), along with the Minas Sextet, perform Num Dia Azul as a set for the first time in over 30 years as they celebrate the re-issue of this record, the first in the group's 35+ year history. 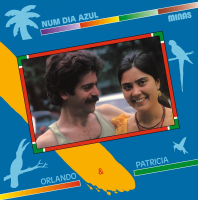 slideshow
She was 23, an American in love with Bossa nova. He was 26, a Brazilian infatuated with American rock and classical music. They were romantically involved and musically bound, drawn to each other's different cultures. Their lives merged romance, music, and youthful dreams, expressed in their first album, Num Dia Azul (In a Blue Day), recorded in 1981 and released on vinyl in Brazil in 1983. Practically all LPs were destroyed in a fire and consequently Num Dia Azul has become an international collector's item, inspiring the re-release on vinyl, as well as a remixed CD version.

In their college days, Patricia King and Orlando Haddad were swept into the Brazilian jazz movement influenced by Sergio Mendes, Flora Purim and Airto Moreira, Hermeto Pascoal, Chick Corea, Santana, Caetano Veloso and Milton Nascimento, strongly apparent on this recording. They were free spirits on the road, traveling with their young baby who absorbed their sounds booming over the recording studio, as they made Num Dia Azul under the name Minas.

The youthful dream that Orlando and Patricia aspired to has come true over and over again. They moved from North Carolina to Brazil, where they lived and worked for two years, then from Brazil to Philadelphia, where thirty-five years later they’ve carried the dream forward raising a family and releasing six other recordings. Their last, the epic Symphony in Bossa, scored for big band and string orchestra, involves nearly 60 musicians, was up for four Grammy nominations and utilizes the best talent Philadelphia has to offer. After more than three decades of music making, Minas continues to engage its fans with a variety of excellent recordings and live performances that only a lifetime relationship can produce.

On April 16th, Philadelphia will have a chance to hear composers Orlando Haddad (guitar and vocals) and Patricia King (piano and vocals), along with the Minas Sextet, perform Num Dia Azul as a set for the first time in over 30 years. Original drummer David Licht, will join Minas along with long-standing bassist Jim Stager, percussionist Dendê, and trombonist Steve Tirpak. In addition to the vinyl, which remained unaltered, Minas will be releasing a CD version totally remixed by engineer Brendan McGeehan and containing two previously unreleased tracks.

Released in Brazil in the fall of 1983 on vinyl, right before Orlando and Patricia moved to the Philadelphia area, and out of print since 1985, Num Dia Azul has become sought-after by collectors worldwide. From the 1000 copies made, 300 were distributed in Brazil, 50 brought to the US, and the rest was lost in a fire at Orlando’s mother’s house in Brazil. Over the years Orlando and Patricia have received requests for the album by collectors from all over the world, and 2 songs were licensed and released in Germany by the label Jazzanova.

Num Dia Azul was recorded in 1980-81 right after Orlando and Patricia finished their degrees at University of North Carolina School of the Arts. It’s interesting to note that drummer David Licht went on to form the Klezmatics, in NY, and Kofi Burbridge, keyboardist and flautist for the famous contemporary group Tedeschi Trucks Band, played the flute solo on the title track “Num Dia Azul." It was Kofi’s first recording session.

As stated by Patricia, “The music really caught the spirit of our youth when we were first diving into jazz and Brazilian music… it’s very interesting to hear some of the solos, some of the playing when you’re very young. It’s very much the essence of your playing years later, except you see that through the years you’ve developed skill and become more refined, but you really do see that the essence is so much there.”

Thanks to a successful crowd funding campaign at the end of 2015, you are holding in your hands the reissue of the debut album from the Brazilian Jazz duo of Orlando Haddad & Patricia King, better know as “Minas”. Originally released in 1983, Num Dia Azul was recorded in Greensboro, N.C. between 1979-81 by Orlando, Patricia and a handful of local players (and one Brazilian, Manoel Monteiro) with every intention of releasing it domestically and that nearly happened too, but the record label they had signed with went bust before they could release the album. The duo, now a couple with a daughter in tow, took the bad news in stride and picked up and moved to Brazil. “We were looking for a change in our lives,” Patricia says, “and we wanted to get more in touch with Brazilian culture and we were pretty free spirits at that time.” With help and advice from the godfather of independent production in Brazil, Antônio Adolfo, they paid to press up their record at Polygram studios in Rio de Janeiro and released it independently in Brazil and later back in the U.S. Shortly after returning to the U.S. in 1983 Orlando’s family home burned down with all of the remaining LPs, approximately half of the original thousand LP run!

This limited-run reissue of 300 black and 100 blue vinyl copies, plus 1000 CDs, in a way, will make up for the records lost in the fire decades ago. From the original production run of one thousand, three hundred or so LPs were distributed by hand by Orlando and Patricia at record stores in Rio and São Paulo and a couple of release parties in Belo Horizonte and Orlando’s hometown of Lavras, Minas Gerais. The couple took two boxes of 50 each back to the U.S. when they returned to the U.S. and settled in Philadelphia, P.A.

Decades later, Orlando recalls, the duo was gigging around their adopted hometown of Philly doing a sound-check at a University of Pennsylvania venue when a DJ approached carrying a copy of their record: “‘Isn’t this you guys?’ I say, ‘yeah’ and he says, ‘this is my favorite record; I play it all the time. When are you coming back to Philadelphia?’ And I say, ‘what do you mean, we live here!’ ‘You do? I didn’t know that, I thought you guys were from Brazil.’” Calls and emails began trickling in, all asking about copies of the original LP from Japan, New Zealand, The Netherlands and even Jazzanova Records from Germany that wanted to license a track. And no one wanted Orlando’s generous offer of a CD-R of the album; they all wanted the vinyl. “The calls kept on coming and people kept on looking for it and then one day I did a Google search and found it on eBay selling for $185. I guess this record is worth a lot more than we thought,” Orlando said by phone.

Being a self-proclaimed member of a loose network of Brazilian music obsessives, I’d heard of this record before once or twice in the past few years: a YouTube clip from a friend in Brazil, a listing on a website in Japan, but I’d never met anyone who had one. The album is a wonderful trip through Brazilian melodies and rhythms, dancing from a more traditional samba jazz arrangement of “So Danço Samba” (originally the only cover song) to steaming percussion workouts that wouldn‘t be out of place on a Hermeto Pascoal album. Having listened to and owning a good number of “Brazilian” albums recorded in the U.S. by a mixed bag of players, I can say that Num Dia Azul stands out for its authenticity, despite having only one native Brazilian (Orlando) on most tracks. The testament to this is that the album was released in Brazil (ostensibly as a Brazilian recording by Brazilian musicians) and was included in a catalog of independent records in 1983 alongside stalwarts of Brazilian music Joyce, Antônio Adolfo and Nivaldo Ornelas. Musically, it’s right there: late 70s/early 80s Brazilian flavored jazz (or is it jazz-flavored Brazilian music?) that would have fit alongside the aforementioned Brazilian artists or the ex-patriot or gringo-led bands led by George Duke, Flora Purim, Airto Moreira, or Azymuth. In fact, Minas opened for Flora Purim in the late 70s in North Carolina with Azymuth as her backing band.

Recorded at Process Studio in Greensboro, N.C. between 1980 and 1981, Num Dia Azul features Orlando and Patricia as the musical nucleus with an interesting cast of characters, but not Carlos Alves, the original drummer and other Mineiro at the onset of the band. Manoel Monteiro, a Brazilian drummer they found in NYC and a student of the legendary Edison Machado, plays alongside original Minas bassist Rick Heyman only on the original version of “Sambawalk.” For the remainder of the album the duo recorded with deep bench of local talent including the very first recording session for Kofi Burbridge who would later go on to great success as the keyboardist and flautist for the Grammy Award-winning blues rock group Tedeschi Trucks Band. The CD reissue unearths two previously unreleased tracks, a later and more “exciting” version of “Sambawalk” as well as a Minas take on “The Girl from Ipanema” that Orlando describes as, “a forgotten recording that has hues of youth and innocence, with a smoky tenor sax solo, and piano and guitar splitting solos in the A and B sections.” Like the classic Gilberto/Getz/Astrud version it’s sung in both English and Portuguese.

Orlando and Patricia continue to make music and had honestly kind of forgot about this record, which has been out of print since its cassette issue in 1985, over thirty years ago. “The music really caught the spirit of our youth and when we were first diving into Brazilian music,” Patricia says. “It’s very interesting to hear some of the solos, some of the playing when you’re very young. It’s very much the essence of your playing years later except you see that through the years you’ve developed skill and become more refined but you really do see that that essence is so much there.