SOURCE: ALL ABOUT JAZZ PUBLICITY
February 26, 2009
Sign in to view read count 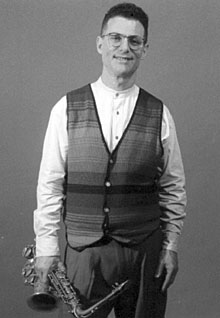 Julius Hemphill (1938-1995) was born in Fort Worth, Texas, in the same musical community as his cousin Ornette Coleman and Dewey Redman. He gained experience as a saxophonist performing with groups such as Ike Turner and Richard Kill's Boogie-Chillin Blues Boys Band. He moved to St. Louis in 1966 and became a founding member of the Black Artists Group (BAG), an interdisciplinary collective that also included Oliver Lake and Hamiet Bluiett. Moving to New York City in 1973, Hemphill founded the acclaimed World Saxophone Quartet with Lake, Bluiett and David Murray, composing prolifically for the ensemble over the next twelve years. A prodigious composer who's work is marked by a sharp, edgy melodicism steeped in the blues, contrapuntal complexity and a striking formal logic, Hemphill was as comfortable writing for full orchestra as he was for his sextet or big band.

Steve Moore (aka STEBMO) is a multi-instrumentalist from Seattle best known as a pianist with a love for Wurlitzers and Casiotones. His list of projects reads like a cult top-10 list with artists as diverse as songwriter Sufjan Stevens, jazz hero Bill Frisell, Seattle rockers Mudhoney and black metal mavericks Sunn O))). His mentors include Julian Priester, Steve Turre, Robin Holcomb and Wayne Horvitz. As a composer, Moore first began to make a name for himself as a member of Skerik's Syncopated Taint Septet. Since 2001, he has performed regularly as part of Laura Veirs' band, and since 2005 has been a member of legendary Seattle band Earth. For this special performance, Moore is joined by bassist Todd Sickafoose, trusted musical sidekick for Ani DiFranco, Jenny Scheinman and many others, and drummer Kenny Wollesen, best known for his work with Sex Mob and John Zorn's Electric Masada.

The Painted Bride Art Center invites you to attend the final events of its Big Ears project, which will feature more than 40 jazz musicians in two weekends. New York-based drummer and composer John Hollenbeck forms the core of the project and brings his Grammy-nominated Large Ensemble to the Bride for performances on February 28th at 7pm and 9pm. On March 6th, Hollenbeck and twelve Philadelphia artists premiere the new compositions that they developed while in residency at the Bride this winter. Several regular Ars Nova Workshop performers are in the group, which includes Matt Davis, Patricia Franceschy, Katt Hernandez, Bart Miltenberger, Gabe Globus-Hoenich, Brian Howell, Matthew Mitchell, Bryan Rogers, Venissa Santi, Aino Soderhielm, Brent White and Bobby Zankel. The Bride is glad to offer you 20% off tickets to all Big Ears shows (may not be combined with other offers). Call 215-925-9914 or use code “ARS” online at paintedbride.org.