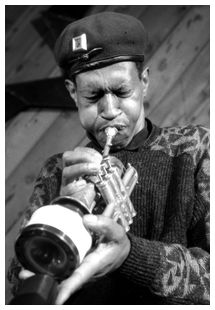 slideshow
Ars Nova Workshop is pleased to commence our season-long celebration of the work and life of multi-instrumentalist and composer Don Cherry (1936-1995). This week's concert features the Philadelphia debut of trumpeter Dave Douglas's Bass Ecstasy. Other upcoming performances include Steven Bernstein's Millennial Territory Orchestra revisiting “Relativity Suite", a new large ensemble led by MacArthur Fellow Ken Vandermark, and Karl Berger's In the Spirit of Don Cherry, featuring a stellar cast of former Cherry collaborators. Please join us for this rare look into the body of work of one of the most influential figures in jazz.

A key figure in modern jazz, Dave Douglas will present his latest ensemble Brass Ecstasy in a rare exploration of Don Cherry's dynamic body of work.

Two-time Grammy-nominated jazz musician Dave Douglas is arguably the most prolific and original trumpeter of his generation. From his New York base, where he's lived since the mid-1980s, Douglas has continued to earn lavish national and international acclaim. His solo recording career began in 1993 with Soul Note's “Parallel Worlds" and he has since released over 28 recordings. In 2005, after seven critically-acclaimed albums for Bluebird/RCA, Douglas launched his own record label, Greenleaf Music. The same year, he was honored with a Guggenheim Fellowship. Douglas is currently the artistic director of the Workshop in Jazz and Creative Music at the Banff Center and the co-founder and director of the Festival of New Trumpet Music, which will celebrate its 7th year in 2009. In addition to leading his own groups, Douglas has important ongoing musical relationship as a member of John Zorn's Masada and with artists such as Anthony Braxton, Don Byron, Joe Lovano, Miguel Zenon, Uri Caine, Bill Frisell, Cibo Matto and Misha Mengelberg.

Dave Douglas & Brass Ecstasy was funded by The Pew Center for Arts & Heritage through the Philadelphia Music Project.

Cherry first attained prominence with Ornette Coleman, performing on the saxophonist's first seven (and most influential) recordings, while ushering in the Free Jazz movement. He quickly became a key figure in the 1960s avant-garde, recording with John Coltrane, co-leading the New York Contemporary Five with Archie Shepp and John Tchicai, and performing regularly with Steve Lacy, Sonny Rollins and Albert Ayler, before recording a number of seminal albums for Blue Note Records. In the 1970s, while incorporated the influences and instruments of Middle Eastern, traditional African, and Indian music into his playing, Cherry laid the groundwork for what is now known as “world music". During the 1980s and 90s his stature as a figure in the world music movement grew, and he performed and recorded prolifically. He formed a trio, Codona, with Collin Walcott and Nana Vasconcelos, and collaborated with artists as diverse as Lou Reed, Sun Ra, Jimmy Hendrix and Krysztof Penderecki.