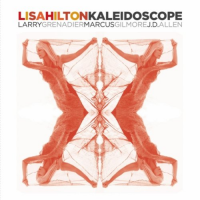 slideshow
Like a kaleidoscope shifting its colorful pieces to create a new vision of a well-known view, pianist/composer Lisa Hilton blends the ever-changing elements of modern and traditional jazz on her 16th release to date. Kaleidoscope (available March 11 on Ruby Slippers Productions) is Hilton's answer to viewing our world and lives with a new perspective.

Although Hilton has been a bandleader for more than a decade, she is acknowledged mainly for her compositions and impressionistic touch at the keyboards. Having over 200 compositions and arrangements credited to her name, she pushes away the idea of being known primarily as a player and shifts her focus to that of a composer. “My greatest passion is to compose, as well as to play the piano in new ways," reflects Hilton. “America has been home to so many great jazz composers in the past, and I am fascinated by our strong heritage and seek to further that."

Kaleidoscope opens with the retro groove of “Simmer," a nod to Horace Silver and the early works of Herbie Hancock, featuring Allen in an entrancing light. The quartet flourishes in this setting. Allen is granted free rein during “Midnight Mania," where the band journeys to a manic state of explosion. Shifting back to the trio setting, the aptly named “Bach/Basie/Bird Boogie Blues Bop" was written as a response to where her inspiration comes from and paints a vivid landscape of the history between classical and jazz compositions. “Composers today must create a body of work that represents the sound and energy of our lives in this century while embracing our inheritance," notes Hilton.

Continuing in the same vein, Hilton channels Bill Evans and Jelly Roll Morton in the dreamy interpretation of Heyman and Young's “When I Fall in Love" followed by a cover of Adele's “One and Only," which acts as a bookend to its predecessor. Hilton considers the song a new romantic standard of today's generation. The pianist's intimate improvisations come to the forefront with the title track “Kaleidoscope" and the solo take of “Stepping Into Paradise."

Ultimately, Kaleidoscope offers a kind of jazz that simultaneously recalls the history of an art form while also challenging us to consider an alternative point of view. “The last few years have been challenging to so many, and I feel we need to somehow shift our perspective - like a kaleidoscope shifts its pretty pieces," reflects Hilton.

Hilton spent her childhood in a small coastal town of central California in a very academic and musical environment, with family chamber music sessions the norm at holidays. Having studied classical and twentieth century piano formally from the age of eight, Hilton left music behind in college to pursue a degree in art. “In retrospect, the years studying art from impressionism to the conceptualists has added to my musical 'palette' - my music is now my art. I use musical elements to paint and later sculpt the sound after I have a compositional form."

Over the course of her career, Hilton has played with numerous jazz luminaries including Nasheet Waits, Christian McBride, Steve Wilson, Jeremy Pelt, and Lewis Nash, among others. Hilton's post bop style influences extend beyond jazz legends to include Muddy Waters, Steve Reich, and even punk rock's Green Day.

Committed to helping students who are often overlooked, Hilton has made time in the last 12 plus years to be involved with students who are blind or visually impaired. Whether performing for, with, or teaching, Hilton has worked with the Perkins School for the Blind (Helen Keller's alma mater), The Chicago Lighthouse for People Who are Blind or Visually Impaired, The Junior Blind for America, Camp Bloomfield for the Blind and Berklee College of Music's new lab for the visually impaired. “I believe that helping those with physical disabilities is an important civil rights issue today," says Hilton. “We really need to extend to those that are dealing with extra challenges, and technology today can go a long ways to leveling the playing field."