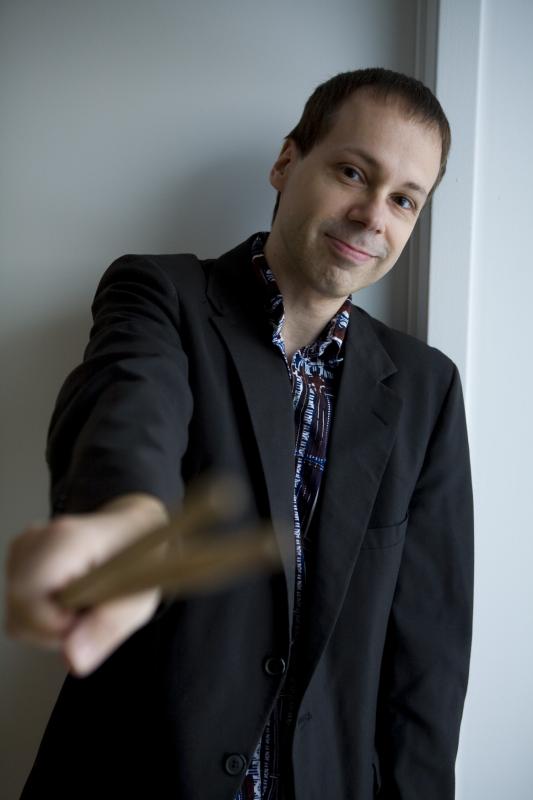 Just off a 3-month long tour in Europe and India, composer/percussionist Lukas Ligeti returns to his hometown of New York City with a trio of live performances ranging from avant-jazz collaborations to a curatorial concert series in Brooklyn. One of the most innovative composers and improvisers on the new music scene, Lukas neatly bridges the classical-modernist-world-music divide. He combines his post-minimalism compositional style with other facets of contemporary expressions such as noise and electronics as well as indigenous non-Western musical and cultural influences.

Lukas dives into the jazz ilk with a jazz-influenced ensemble, the Lukas Ligeti Quintet featuring Leron Thomas (trumpet), Travis Sullivan (sax), Evan Lipson (bass), LL (drums) and TBA (piano). On the program will be new works by Lukas. He most recently explored the jazz realm in his 2011 release of Pattern Time (Innova) which was described as an unusually articulate hybrid of jazz, modern-classical, and African ideas. It “explored[s] incredibly rhythmic juxtaposition as only Ligeti can (The Jazz Session).”

Described by John Zorn as “one of the most interesting compositional voices working today,” composer-percussionist Lukas Ligeti has developed a musical style of his own that draws upon downtown NY experimentalism, contemporary classical music, jazz, electronica, and world music, particularly from Africa. Lukas creates music ranging from the through-composed to the free-improvised, often exploring non-Western elements, and is a pioneer in the field of experimental intercultural collaboration. He is the recipient of the Alpert Award in the Arts in Music (2010).

Lukas studied composition and jazz drums at the University for Music and Performing Arts in Vienna, Austria, and spent two years working at CCRMA, the computer music research center at Stanford University, before settling in New York City in 1998.

Lukas has been commissioned by Bang on a Can, Kronos Quartet, Ensemble Modern, the American Composers Orchestra, the Vienna Festwochen, Austrian Radio, and Radio France, to name a few; his music has also been performed by the Vienna Radio Symphony Orchestra, Orchestre National de Lyon, the London Sinfonietta, San Francisco Contemporary Music Players, and the Amadinda, Third Coast, and So Percussion Groups. He frequently performs solo on the marimba lumina, a rare electronic percussion instrument.

He has led or co-led experimental intercultural projects in Florida, Côte d’Ivoire, Egypt, Uganda, Zimbabwe, and Lesotho, among other places, has taught at the University of Ghana, and was composer-in-residence at the University of Witwatersrand in Johannesburg, South Africa.

Lukas’ music is has been released to high acclaim on two CDs on the Tzadik label as well several more on the Cantaloupe, Intuition, TUM, Wallace, and Innova labels, among others. Recently, Lukas toured India, giving solo concerts and workshops in the major cities but also as far afield as Nagaland. He also participated in the project “Visiting Tarab” curated by Tarek Atoui, performing in Lebanon and Sharjah, and contributed a piece to a CD of remixes of Meredith Monk where other contributors included DJ Spooky, Björk, and Ryuichi Sakamoto.