I was very moved by Al’s recent passing, and thought a lot about what he meant to me as an artist. He was a great inspiration to me, and this tune fit perfectly with my style and translated beautifully as an instrumental with my favorite elements–acoustic piano, nylon string guitar and a hint of Latin percussion. ‘One Way’ is a song about love and fits in perfectly with the overall theme of Fly Away Butterfly. 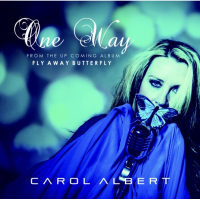 A few months after energizing smooth jazz radio with her vibrant, optimistic early 2017 single “On My Way,” Atlanta based composer, keyboardist and vocalist Carol Albert keeps the positive, optimistic vibes and the momentum flowing with her fresh and vibrant re- imagining of legendary singer Al Jarreau’s classic “One Way.”

The soulfully exotic, high energy piano driven tune, which evolves from gently seductive opening verses into a spirited, intensely grooving ensemble jam, is the third lead single from Carol’s upcoming full length concept album Fly Away Butterfly, set for release in June. “On My Way,” the follow-up to her popular 2016 re-imagining of the Brazilian classic “Mas Que Nada,” earned spins on 11 reporting Billboard stations, placed on the New and Active list of Billboard’s Smooth Jazz National Airplay Chart for four weeks in a row. It also reached the Top 20 on the Smooth Jazz Network chart and #12 on The Groove Chart, where it hit that spot between the latest releases by genre greats Brian Culbertson and Jeff Lorber Fusion.

The original version of “One Way” appears on Al Jarreau’s 1988 hit album Heart’s Horizon. I have always loved the song and thought creating and performing a new arrangement of it would be the perfect celebration of his artistry and life,” says the classically trained Carol, who has performed throughout the U.S. and internationally in numerous European countries, including Sweden, Germany, France and England.

“I was very moved by Al’s recent passing, and thought a lot about what he meant to me as an artist. He was a great inspiration to me, and this tune fit perfectly with my style and translated beautifully as an instrumental with my favorite elements—acoustic piano, nylon string guitar and a hint of Latin percussion. ‘One Way’ is a song about love and fits in perfectly with the overall theme of Fly Away Butterfly.

Carol’s multi-faceted career includes the release of five albums dating back to the early '90s, including the popular 2006 new age solo piano releases Morning Music and Night Music; serving as a staff accompanist for the Georgia State University Music Department, Agnes Scott College and the Atlanta Ballet; and providing entertainment for trade shows, corporations, organizations and pubic venues. She has also received an Emmy nomination for Outstanding Achievement and Individual Excellence as a Composer for original theme music, and won a first place award in the professional jazz category from the Atlanta Songwriter’s Association. “Dreamer” from Christmas Mystique was chosen as one of the finalists in the New Age Music category of the Global Peace Awards. In addition to performing and composing, Carols is an educator who trains and mentors young promising music students.

The beautifully elegant and flowing, blue-hued promotional video for Carol’s upcoming album Fly Away Butterfly was shot by Mil Cannon, who has put his signature as an image maker on everyone from Usher and Carrie Underwood to Mariah Carey, Whitney Houston, TLC, Pink, Tony Braxton and Outkast.