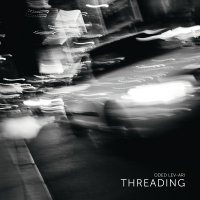 Threading - to be released via Anzic Records on April 28, 2015 - presents Lev-Ari's instrumental and vocal works played by an all-star 11-piece band including Anat Cohen and Matt Wilson

Composer-arranger-producer Oded Lev-Ari has crafted acclaimed albums by the likes of hit band 3 Cohens, clarinet icon Anat Cohen and woodwind sage Marty Ehrlich, as well as rising-star singers Amy Cervini, Melissa Stylianou and vocal trio Duchess. Now the Tel Aviv-born, New York-based Lev-Ari steps out with the first recording under his own name: Threading, to be released by Anzic Records on April 28, 2015. The album presents six inspired Lev-Ari compositions—instrumental and vocal - performed by an all-star 11-piece New York band that includes Anat Cohen and the ace Matt Wilson on drums, as well as guest vocalists Alan Hampton and Jo Lawry. Along with Lev-Ari's own pieces, the disc includes his artful instrumental and vocal arrangements of songwriter Gordon Jenkins' classic “Goodbye." The chamber-jazz sound of Threading—which features not only winds, trumpet and a textured rhythm section but also three cellos - hints at varied sonic worlds, from jazz sound painters Gil Evans and Maria Schneider to tango nuevo king Astor Piazzolla and contemporary classical composers. Ultimately, though, Lev-Ari has his own, individual soundprint, one of cinematic richness and open-hearted lyricism.

Lev-Ari, a student of the great composer-arranger Bob Brookmeyer, says what he appreciated most about his teacher was his intrepid musical sensibility. “I love Bob's music, even if mine doesn't really sound anything like his," Lev-Ari says. “He was such an inspiring figure, particularly how courageous he was in the kind of music he let himself make. He was a keen admirer of contemporary classical, and he let that into his work, unafraid to incorporate new sounds into the big-band palette. That sort of open mind and ear is something to aspire to."

With Threading, “space and personality" were bywords in the studio for Lev-Ari and his engineering partner, James Farber. “James and I had worked before on several albums together, and he really knows the studio we used, Sear Sound in Manhattan," Lev-Ari explains. “We're on the same page in terms of quality of sound, with space around the instruments being key. We also share a production credo, in that it's not about perfection - it's about expression, telling a story in music. The goal is capturing the essence of the music, especially in those moments where it builds organically to an emotional impact. We had a band of amazing musicians, who naturally invest personality into everything they play - and that's what makes music come alive, off the page and into the air."

The title track of Threading opens the album with irresistible shades of Piazzolla in the writing for strings and piano; then there's Anat Cohen's dynamic clarinet, her solo building to a peak as it traces lines with Nadje Noorduis's trumpet. There are indigo echoes of Oliver Nelson's “Stolen Moments" in “Lost and Found," with cool-toned solos from Will Vinson's alto sax and Brian Landrus's baritone. “Voices," incorporating a titular and textural homage to contemporary Latvian composer Peteris Vasks, resonates with a dark lyricism, the collective soloing in its middle section a priceless instance of session spontaneity; the bridge of the piece, with the composer voicing a minimalist melody on piano as winds trace arabesques above, is one of the album's most ravishing passages. There's more Vasks-esque writing for the three cellos in “Black Crow," as well as an evocation of Oded's Israeli roots. Lev-Ari's kindred-spirit connection with Anat Cohen - they have been friends and collaborators since high school in Tel Aviv - is mirrored in her Eastern European-tinged lines. “Black Crow" also features a characteristically musical drum solo by Matt Wilson.

“E and A," the title referencing the first initials of Lev-Ari's two children (with singer Amy Cervini), brims with pastoral loveliness, as well as a mix of Old World and New World influences. A melody-rich highlight of Threading comes with “The Dance," a vocal piece for which Lev-Ari wrote both music and lyrics; the gorgeous vocal combination of Alan Hampton (a collaborator with Gretchen Parlato, among others) and Jo Lawry (Sting's go-to backing singer) sees their voices twining around each other to tell an emotional story. Then there are the two versions of “Goodbye," the Gordon Jenkins song made famous by Frank Sinatra on his LP Only the Lonely. Cohen's clarinet takes a vocal role in the instrumental, after a limpid introduction by guitarist Gilad Hekselman. And if Lev-Ari's subtle arrangement is both earthier and airier than the vintage treatment Nelson Riddle made for Sinatra, Hampton's singing is less theatrical, more conversational. Lev-Ari says: “It's an intimate piece of music that I love, and Alan has this quality to his voice that makes it seem as if he were singing just to you, revealing something very personal."

Even with such moments of magic, Lev-Ari called the album Threading to evoke the sense of craftsmanship that goes into making music. “A work of art really is a magical thing, and people don't always want to know how the trick is done," he explains. “But writing, arranging and recording can be exacting, almost physical work, like sewing or weaving. That's something that always comes to mind when I'm writing, particularly for a larger ensemble. I wanted to hint at the tradesman-like craft of the work, those aspects of loving, hard-won detail that you hope add up to something beautiful."

“Putting lightning in a bottle is what Oded Lev-Ari specializes in." &#151DownBeat Magazine