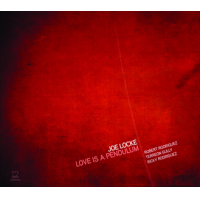 slideshow
Motema Music Proudly Announces The Release of Joe Locke's Most Personal & Emotive Work To Date Love Is A Pendulum Available May 26, 2015 Available for pre-order on iTunes Now!

Joe Locke is a musician's musician, an artist for the ages, a man who has been gracing stages and studios with his immense talent, and uplifting spirit, since he was fifteen. Locke is a man who has gathered no moss as he evolved into a communicator, a conceptualist, a composer, and a modern virtuoso who defies categorization, creating music with small groups to symphony orchestras, and with artists as diverse as Cecil Taylor and The Beastie Boys. Derk Richardson said of Locke in The San Francisco Bay Guardian that, “not only has he mastered an instrument that has catapulted only a handful of players to the forefront of modern jazz - but he has done so in a way that transcends mere technique and establishes him as a unique and adventurous musical voice." With more than thirty acclaimed recordings to his credit, it is no wonder The Times (London, U.K.) proclaimed that, “there seems little doubt that Locke, with his ability to play cool and funky, heady and relaxed, is set to become the pre-eminent vibraphonist in jazz." Joe Locke's new recording, Love Is A Pendulum (available on the Motema Music imprint on May 26, 2015), is just over an hour in length, but has taken a lifetime to make, as it encompasses all of Locke's joys and sorrows, and utilizes all of his slings and arrows.

Love Is A Pendulum is an arresting collection of all original music, the centerpiece of which is a five movement suite, based on a poem by the writer and musician Barbara Sfraga (from her Subway Series work), a multi-dimensional artist who Locke has long admired. Locke explains further, “each verse begins with a metaphor describing love - its properties and tendencies - and how (possibly) to navigate them. As is so often the case in my composing process, the genesis of a musical idea comes from words, whether it be a novel, a poem, or even a simple phrase uttered in a certain way. I feel that Love Is A Pendulum is my best work thus far and I am eternally grateful to Barbara for the inspiration her poem has provided."

This recording is the most personal, most compositional and most emotive work of Locke's career, and it features a hand-picked cast of outstanding musicians that bring Locke's vision to life in spectacular fashion: special guests Rosario Giuliani, Donny McCaslin (saxophones), Paul Bollenback (guitar), Victor Provost (steel pan) and Theo Bleckmann (voice), with Locke's core working quartet, featuring Robert Rodriguez (piano), Terreon Gully (drums and co-producer) & Ricardo Rodriguez (basses). Locke commented in the liner notes about the musicians featured on Love Is A Pendulum, “as tightly composed as much of this music is, it would not have risen off the page without the creative contributions of the musicians here. Robert, Terreon and Ricky, the core of this group, have been hugely important to the realization of this project. Working together with a great natural chemistry, they sculpted the shape of each piece into something beyond what I had imagined. Their ability to deal with the written material while at the same time injecting it with soul and spontaneity was (and continues to be) remarkable. I'm also grateful that all of my first choices were available (with a bit of juggling!) to be guests on Love Is A Pendulum."

More on the music from Love Is A Pendulum

Variation On Wisdom is a through-composed chamber piece and a re-working of the material from “Last Ditch Wisdom" (track #7). On Love Is The Tide, “I wanted to convey the surging power described in this particular verse of the poem. There are a lot of shifting rhythms occurring, but its essence is the Blues," said Locke. Love Is A Planchette (featuring Theo Bleckmann) depicts the movement of a planchette as it moves across a ouija board. This melody is beautiful and gentle rather than spooky, as it, “describes the light touch we must keep on love in order for it to move us from one place to another," explained Locke. Love Is A Pendulum was the first movement Locke composed for the suite. As with the movement of a pendulum, the band goes back and forth between the sections of this composition. Played as a rubato ballad, Love Is Letting Go is a meditation on love's eternal nature. “For the beginning of Love Is Perpetual Motion I wanted a wide open canvas for the two saxophones to have a conversation, interspersed with written material. The main melody of the piece does not occur until after the 4:20 mark, where it emerges from 3/4 time into a 9/4 clave, followed by vibes/pan trading and a piano solo before a restatement of the melody," explained Locke. For Jesse Mountain is dedicated to Locke's nephew Jesse. “Big man, big heart," said Locke. Last Ditch Wisdom speaks for itself - “NYC hardball, start to finish." The album concludes with the lovely ballad, Embrace, a composition based on George Gershwin's “Embraceable You", and conceived by Locke as a vehicle for Victor Provost. Pianist Robert Rodriguez's lyrical ride, on top of Gully's creative groove, concludes the recording on a consonant note.

Joe Locke is widely considered to be one of the major voices of his instrument. Long known to be a soloist capable of stunning physical power and broad emotional range, it was not until the last decade that he emerged as the composer, bandleader and conceptualist that he is considered today.

This is in no small part due to his recent solo projects, notably the three distinct albums he has released since joining Motema Music in 2011, which display his immense stylistic versatility and ability to create artistic depth in a variety of contexts: Signing (2012, the long awaited follow-up studio album of Live In Seattle), Wish Upon A Star (2012, Locke's first ever symphonic project, featuring Locke's Quartet with the Symphony Orchestra of Lincoln, Nebraska), and Lay Down My Heart (2013, jazz radio chart's #1 Blues & Ballads album). Locke's latest Motéma release, Love Is A Pendulum is already being hailed the most important work of his career. Other notable recordings in Locke's extensive discography (more than thirty albums as a leader) include, Four Walls of Freedom (Sirocco), a six movement suite featuring the late tenor saxophonist Bob Berg; Live in Seattle (Origin) by The Joe Locke/Geoffrey Keezer Group, which won the 2006 Ear Shot award for Concert of the Year, and his eloquent and vibrant quartet, Force Of Four (Origin).

Locke has won numerous awards and polls, including the 2006, 2008 and 2009 “Mallet Player of the Year" award from the Jazz Journalists Association, and the 2013 Hot House NYC Jazz Awards for best Vibes Player. He is active as a clinician and educator in the United States and Europe and has been the International Vibraphone Consultant at the Royal Academy of Music, London, on a visiting basis since 2008, holding the title of Honorary Associate of The Royal Academy of Music since 2013. Locke endorses Malletech instruments, and Love Is A Pendulum is the first recording to feature the innovative OmegaVibe (also endorsed by Stefon Harris, Tony Miceli and Warren Wolf). Joe Locke also proudly endorses his own Signature Series of Mallets, “The Joe Locke Series".