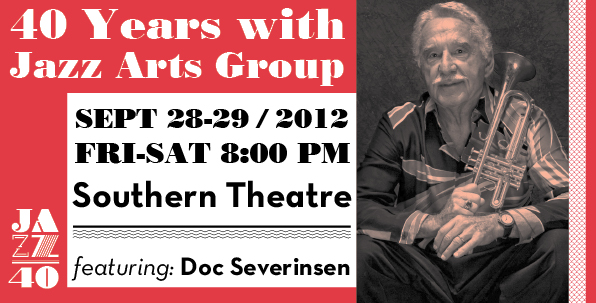 slideshow
Columbus, OH – The Jazz Arts Group of Columbus (JAG) is proud to present the 40th anniversary season of the Columbus Jazz Orchestra (CJO) under the direction of world-renowned bandleader and trumpet virtuoso Byron Stripling. Helping to kick off the ruby season of the CJO is none other than legendary Tonight Show bandleader and Grammy Award-winner Doc Severinsen in “40 Years with Jazz Arts Group" (Sept. 28-29, 2012 at the Southern Theatre). This exclusive two-night performance will also feature one of the CJO's most requested themes – a special tribute to controversial jazz maven Stan Kenton, along with some other musical surprises.

Notorious for both his high-range trumpet playing in addition to his equally flashy fashion, Doc Severinsen remains one of the most widely recognized jazz musicians today. Best known for his 35-year long stint as the musical director on The Tonight Show Starring Johnny Carson from 1967-1992, Severinsen led the NBC Orchestra to become the most widely heard big band of the age with an audience more diverse than the standard jazz audience of the time. Severinsen's stage presence moved beyond the musical realm and he proved capable of captivating his audience by way of comedic presence, incidental music, flashy attire and his willingness to make the band not only a sideshow but an integral aspect of The Tonight Show experience.

A native of small town Arlington, Oregon, Doc picked up the trumpet at the age of seven despite his father's wishes for him to play violin and Doc's own desire to play trombone. Any reservations became moot quickly as it became clear that Doc had a natural talent behind the horn. At the age of twelve he won the Music Educator's National Contest and by the time he reached high school, Doc left home with the Ted Fio Rito Orchestra in what would become one of the longest and most successful career in jazz history.

Not only an entertainer, Doc recorded numerous albums in the 1950s and '60s of jazz standards in addition to appearing with other professional groups such as the Thad Jones/Mel Lewis Band (known today as the Vanguard Jazz Orchestra). Doc continued to record into the early '90s in addition to scoring the music for the 1961 film Nude on the Moon and conducting several pops orchestras throughout the nation.

After leaving The Tonight Show in 1992, Doc was on the road again within a week, and at the age of 85 he still shows no sign of slowing down. Still regarded as one of the most proficient trumpet players today, Doc continues to captivate audiences worldwide. Though his musical ability and flamboyant personality remain his most immediately recognizable traits, it is Severinsen's influence and decades of exposing the American audience to jazz music that will become his legacy.

“I would like to see more large cities with this kind of arts organization," shared Severinsen in reference to JAG. “It would benefit the American culture a great deal. My hat is off to the Jazz Arts Group of Columbus!"

Single tickets are on sale now for $49 (whole house) and available through the CAPA Ticket Office at 614-469-0939 and through all Ticketmaster outlets. Student and group rates are also available. Call 614-294-5200 or visit www.jazzartsgroup.org for more information on individual shows and subscriptions.

About the Jazz Arts Group