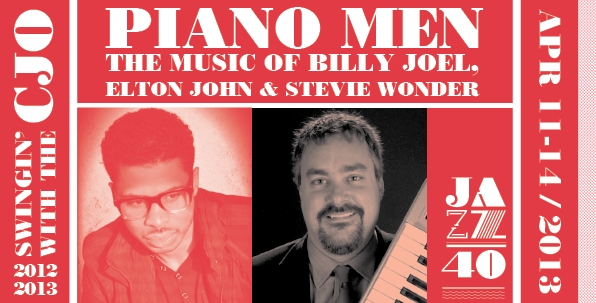 slideshow
Columbus, OH – In celebration of Jazz Appreciation Month, the Jazz Arts Group of Columbus (JAG) returns to the historic Southern Theatre to pay tribute to your favorite keyboard legends in “Piano Men: The Music of Billy Joel, Elton John & Stevie Wonder," April 11 - 14. The powerful vocals of Chester Gregory and keyboard wizardry of Dave Powers join Bobby Floyd and the CJO on timeless classics like “Piano Man," “Just the Way You Are," “Your Song," “Rocket Man," “Sir Duke," “Isn't She Lovely," and many more!

Chester Gregory burst onto the theater scene as Jackie Wilson in the original production of The Jackie Wilson Story for which he received major acclaim such as, The Jeff, AUDELCO, BTAA and Black Excellence Awards. Chester went on to star in the original Broadway casts of Tarzan (as “Terk") and Cry-Baby (as “Dupree"). In 2009 he went on tour again, this time with Dreamgirls, and was awarded Best Supporting Actor by the NAACP Theater Awards and garnered accolades around the world, including both the United States and Japan, for his powerful performance as “Jimmy Early." Chester is currently starring in the smash-hit Broadway musical Sister Act as “Officer Eddie Souther," and has earned an Outer Critic Circle Award Nomination for this role. Though widely celebrated as a talented actor, Chester remains true to his love of music and has produced three solo recording projects, his debut album In Search of High Love, his mix-tapes, Breakbeat Karaoke, and If U Only.

For over 30 years, Dave Powers has been a vital part of the Columbus, Ohio music scene as a pianist, keyboardist, and vocalist. Considered one of the most successful musicians in the local spectrum, Dave manages to win over the hearts of all who hear him perform. From clubs and restaurants to corporate events and private parties, his vast repertoire is as diverse as the audience that he entertains. His talents can be heard on a variety of recordings by local music greats Chuz Alfred, Cornell Wiley, Jim Masters, Gene Walker, “Jazz & Eggs," Don Bullard, and on recordings with guitarist Tony Janflone Jr. from Pittsburgh, PA. He has also recorded several titles of his own including the most recent, The House Jazz Concert Series, Vols. 1-4, documenting live performances given at Dave's home for an enthusiastic audience.

To commemorate Jazz Appreciation Month and National Autism Awareness Month, both celebrated annually during the month of April, the Jazz Arts Group will form a unique partnership with the Helping Hands Center for Special Needs (HHC). HHC will join the Columbus Jazz Orchestra during its “Piano Men" concerts to share information about the work being done locally and statewide around issues of autism research and awareness.

Under the direction of Mark Donavan, the Columbus Youth Jazz Orchestra (CYJO) provides opportunities for talented high school age musicians to further their experience in America's classical music – jazz. Comprised of premier players in grades 9-12 from central Ohio and beyond, the CYJO has a 30-week season during the school year, and performs at the Southern Theatre prior to each of the Columbus Jazz Orchestra's Sunday matinee concerts. The CYJO plays literature of the highest level with repertoire from the libraries of the great big bands, including Duke Ellington, Count Basie, Woody Herman, Oliver Nelson, Benny Goodman and Dizzy Gillespie. Admission to the CYJO performance at 2 PM is included with each 3 PM Sunday matinee ticket purchase.

Audience members can also join Byron Stripling for a casual and engaging conversation with Dave Powers on Saturday, April 13 at 2 PM in a new workshop series at the Jazz Academy. “Offstage at the Jazz Academy" provides participants a behind-the-scenes glimpse from the artist perspective on performing with the CJO – adding new perspective to being an audience member. In addition to the opportunity to learn something new, each guest artist will be asked to share what they are currently listening to on their iPods or CD players, introducing audiences to new and exciting music and artists. “Offstage at the Jazz Academy" is free to CJO subscribers and $10 for general registrants. Pre-registration is requested and available at www.jazzartsgroup.org.

The Smithsonian's National Museum of American History will mark the 12th annual Jazz Appreciation Month (JAM) in April with a month-long celebration of jazz featuring performances, talks, tours and family-oriented events. The museum launched JAM in 2001 as an annual event that pays tribute to jazz both as a historic and living American art form. It has since grown to include celebrations in all 50 states and 40 other countries. The Spirit and Rhythms of Jazz is the 2013 JAM theme highlighting jazz cultural history, musical performance and stories, programs and productions this April. JAM and UNESCO's International Jazz Day April 30 provide rich platforms for individuals and communities to explore jazz principles of freedom, inclusion and creativity to learn how jazz has transformed America and inspired the world.

Helping Hands Center for Special Needs is a non-profit school and therapy center with a mission to meet the educational and therapeutic needs of children with Autism and other developmental disabilities. Founded by Abby David and Erin Nealy, the goal of Helping Hands Center is to help each child reach his or her highest potential. Helping Hands Center accomplishes this goal by providing outstanding school day, summer camp and outpatient therapy services in speech, music, physical and occupational therapies with a staff of more than eighty certified teachers, therapists, psychologists and Board Certified Behavior Analysts.

National Autism Awareness Month has been celebrated since the 1970s. The United States recognizes April as a special opportunity for everyone to educate the public about autism and the issues within the autism community. Recently, The Centers for Disease Control updated the prevalence of an Autism Spectrum Disorder (ASD) diagnosis to 1 in every 88 children born in the US; and for boys, the statistic is a staggering 1 in 54.