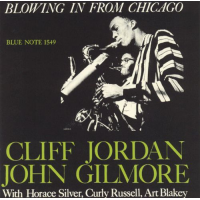 slideshow
Clifford Jordan doesn't get the attention or praise he deserves. I'm not sure why. The tenor saxophonist was born in Chicago and spent most of his early years there, playing with touring artists who came to town. At age 26, Jordan moved to New York, where he recorded five albums for Blue Note in 1957 and '58, including on Horace Silver's Further Explorations. Albums with trumpeter Lee Morgan and trombonist J.J. Johnson followed before Jordan began recording for Riverside and Jazzland in the early 1960s. He toured Europe with Charles Mingus and Eric Dolphy in 1964, and recorded frequently in the late 1960s and '70s as a leader. During this period, he recorded Glass Bead Games, a terrific album.

Jordan's very first album was Blowing in From Chicago, recorded for Blue Note in March 1957. Jordan was joined by tenor saxophonist John Gilmore, Horace Silver (p), Curly Russell (b) and Art Blakey (d). Gilmore also grew up in Chicago and spent 40 years with Sun Ra starting in 1956. In the late 1950s, he so impressed John Coltrane that Coltrane studied with him to adapt Gilmore's free sound.

What's odd is why Blue Note chose to team Jordan with Gilmore (above), making it difficult for the average listener to distinguish either one of the players. In addition, Gilmore was a bit more seasoned so stands out a little more. For the record, Jordan plays the lead parts with a mellower tone while Gilmore has the sharper, more aggressive sound.

Now that you're aware the album features two tenor saxophonists and who is playing which parts, the listening experience becomes much more fascinating, especially on Status Quo, Everywhere and Let It Stand. All three are gorgeous hard-bop compositions. Jordan and Gilmore play as if riding along like two large Harleys or Honda motorcycles on the highway. Both have a big sound and both move along at a steady clip. They are greatly assisted by this magnificent rhythm section, with Silver's comping on the piano and Blakey's driving force on drums. The more you listen to this album, the more you grow accustomed to the distinct sound of the two players. Best of all, there's plenty more Jordan where that came from.