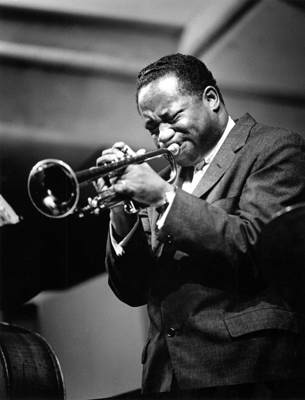 slideshow
Today is the 82nd anniversary of Clifford Brown’s birth. Here is what I wrote in Rifftides on June 26, 2006, half a century following his death.

Fifty years ago today at The Seattle Times, as I ripped copy from the wire machines my eye went to a story in the latest Associated Press national split. A young trumpeter named Clifford Brown had been killed early that morning in a car crash. My heart stopped for a beat or two. My stomach churned. I felt ill. I was attempting to master the trumpet and, like virtually all aspiring trumpet players, idolized Brown. The life of a majestically inventive musician had ended violently on a rainy highway in Pennsylvania. He was four months short of his twenty-sixth birthday. When I think about his loss, Istill feel ill.

There has never been a jazz musician who worked harder, lived cleaner, and accomplished or promised more in so short a lifetime. His practice routine encompassed taping himself as he worked out on trumpet and piano. I have listened to some of those tapes. It is moving to hear Brown pursue–and achieve–perfection as he brings complex ideas to fruition through the persistent application of his technical mastery, to hear him sing a phrase and then play it repeatedly until he has polished it nearly to his satisfaction. Like most first-rank artists, he was never truly satisfied with his performance. To listeners, however, Brown’s solos are among the glories of twentieth century music. To trumpet players, his work remains an inspiration. His passion, power, lyricism and flaweless execution constitute a model whose pursuit is bound to bring improvement.

In Today’s Washington Post, Matt Schudel summarizes Brown’s life and contributions. For a fuller account, read Nick Catalano’s biography of Brown. Fortunately, Brown recorded copiously during his few years of playing. Most of his work remains in print. This album captures him at his peak with the group he and drummer Max Roach co-led. This box set covers highlights from his recordings for several labels. If you don’t know Clifford Brown’s work, I suggest that you move immediately toward the nearest CD shop or website.

The television comic Soupy Sales loved jazz, knew its history and many of its leading players. Early in his career, when he had a local show in Detroit, he frequently presented jazz stars as guests. After Sales died on October 22 at the age of 83, many obituaries mentioned that the only known video of Clifford Brown performing is from a kinescope recording of the Sales show. For decades, it was assumed lost, but Sales found the film in his garage in the mid-1990s. Here is the trumpeter in February, 1956, five months before that fatal auto crash, playing “Lady Be Good” and “Memories of You.”

Study in Brown, mentioned by Clifford in the interview, is one of the important albums by the quintet he led with drummer Max Roach. The Dinah Washington jam session with Brown, Roach, Maynard Ferguson, Clark Terry and Herb Geller–among others–is another basic repertoire item for serious jazz listeners.