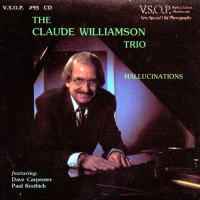 Claude Williamson, a piano mainstay of jazz in California for seven decades, died on July 16 in Los Angeles. He had been in decline since he fell in his home in 2015 and broke a hip.

After Williamson moved from Boston to L.A. in 1947, he played with Charlie Barnet’s band for two years and was the featured soloist on the widely popular recording “Claude Reigns.” Barnet named the piece after him. Williamson’s harmonic sophistication and responsive timing made him an ideal accompanist for instrumental soloists and singers. After working as June Christy’s accompanist, In 1950 Williamson joined The Lighthouse All Stars, a quintessential band in what came to be called West Coast Jazz. Later, he co-led a quartet with saxophonist and flutist Bud Shank and worked with Red Norvo, Frank Rosolino, Barney Kessel, Art Pepper and other central figures in Southern California jazz. In a New York visit, he also recorded with two hardcore east coasters, bassist Sam Jones and drummer Roy Haynes.

Initially inspired by Teddy Wilson, the young Williamson came under Bud Powell’s spell and absorbed the bop pioneer’s example into his own style. From his 1995 album Hallucinations, here is Williamson with bassist Dave Carpenter and drummer Paul Kreibich in Powell’s “Bud’s Blues.”

A live recording from The Jazz Bakery, also with Carpenter and Kreibich, catches Williamson in fine latter-day form in a mix of Powell compositions and songbook standards. See this Los Angeles Times obituary for an extensive account of Williamson’s career.