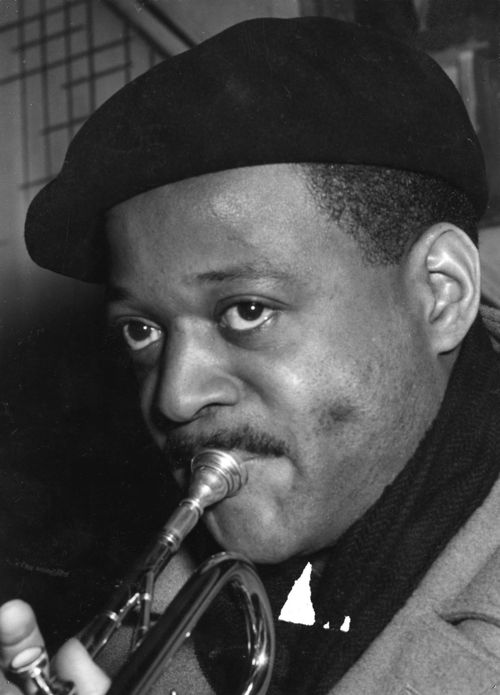 slideshow
Clark Terry, one of the most admired and accomplished jazz trumpeters and flugelhornists of his generation who appeared on an astonishing 928 known jazz recording sessions and played in the Duke Ellington Orchestra throughout the 1950s before recording extensively as a freelancer, died on Feb. 21. He was 94.

Like a tap dancer, Clark liked to work his way nimbly through up-tempo solos, frequently using a blowing style style that was reminiscent of what violinists do when playing with pizzicato. Clark's sound was unmistakable, with a piercing middle and warm, round sides. Clark didn't linger long on notes on most solos, preferring instead to release volleys and then let their tones dies off in spaces. He told me it was an approach he developed while in Count Basie's band in the late 1940s. There, he created a tonging technique in his mouthpiece that made his notes sound like the patter of an auctioneer.

Clark also is perhaps best known for his distinct slurring of notes, as if bending them slightly. I once asked saxophonist Hal McKusick (above), who was close to Clark, what made his horn unique: “Clark is special because he plays effortlessly with a beautiful sound—always swinging, always thoughtful and always playful. It's his attack, his ability to tell a story in such a beautiful way."

Clark grew up in a trumpet town—St. Louis. His trumpet influences were Charlie Creath, Dewey Jackson and Shorty Baker. In the Navy during World War II, Clark was billeted at the Great Lakes Naval Training Station near Chicago, where he helped assemble and train bands that were then dispatched to other bases worldwide. After he was discharged, Clark played with Charlie Barnet, who wrote to Duke Ellington about him. But Clark would first play with Count Basie in the late 1940s before joining Duke on a full-time basis in 1951.

Clark's first use of the flugelhorn on a recording came on two tracks in 1957. Here's what he told me:

JazzWax: When did you first record on the flugelhorn?

Clark Tery: When I was making an album with Billy Taylor [Taylor Made Jazz in 1957]. I had ordered one because I liked the way it sounded. All of the horn players in Jimmie Lunceford’s band had doubled on flugelhorn.

JW: What happened on the Billy Taylor (above) session?

CT: The horn came in a box to my hotel in Chicago. I was in Duke’s band at the time and we had a day off, so I was recording with Billy. When the package arrived, my roommate thought it was something I wanted right away. So he came down to the place where we were recording and brought it into the studio. When I opened the package, the horn looked great. It was a beautiful, gold-plated instrument. I tried it right there on the spot and loved it so much I decided to use it on the date."

Among Clark's most fascinating recordings are his dates with Thelonious Monk, particularly on Clark's In Orbit (1958). One might assume that Clark and Monk would be like apple pie and bacon, but the pairing worked remarkably well:

JazzWax: You recorded twice with Thelonious Monk, in 1956 and 1958. What was special about him?

Clark Terry: Monk was one of those guys who was set in his ways. You either liked him or you didn’t. There was no middle. I’ve always liked people who were unusual or different. Monk knew what he wanted and knew what he was doing. He was respectful, but we didn’t have much to say to each other.

JW: How did you wind up recording with Monk on your album In Orbit in 1958?

CT: I needed a pianist, and producer Orrin Keepnews asked me if I wanted to use Monk. I said, “Great.” So Orrin called him in. After we recorded a bunch of things, we still hadn’t played anything of his.

CT: I said, “Monk (above), I think it’s about time we recorded one of your tunes.” He didn’t answer, so as I walked away he growled, “Come back here.” He said, “Fine, let’s play this.” He started playing the opening notes to Let's Cool One. He said, “You’ll hear it and then we’ll record it. Just listen.” So I listened and then we recorded it. I had never heard that tune before, and there wasn’t any music. We just did it [laughs]."

Most of all, Clark had a personality that made you feel welcome. He's easily one of the most jovial jazz masters I've had the opportunity to interview. During our phone conversation, Clark loved to laugh and took every opportunity to make me laugh. Clark viewed laughter not as an emotional reaction to something funny but as two soloing horns, each laugh distinct and improvised. In this regard, it was beautiful blowing with Clark. We will all miss him.

JazzWax note: JazzWax sends its deepest condolences to Clark's wife, Gwen (above, with Clark), whose tireless work making Clark comfortable during periods of enormous stress, pain and despair not to mention financial hurdles qualifies her for sainthood. Gwen sustained Clark for years and made Alan Hicks' recently released documentary, Keep On Keepin' On, possible. Big hug.

JazzWax tracks: Here are seven of my favorite Clark Terry tracks—all you need to fall in love with his sound and spirit:

Here's Tuma, a stunning ballad by Clark in 1955 on the EmArcy album entitled Clark Terry, with Horace Silver on piano:

Here's the Quincy Jones-arranged Double Play from the same album as the one above: Double Play

Here's one of Clark's first two recordings on flugelhorn for Billy Taylor's Taylor Made Jazz in 1957: Tune for Tex

Clark Terry radio. WKCR-FM in New York is playing Clark around the clock today and on Tuesday until 3 p.m (EDT). To listen from anywhere in the world on your computer, go here.