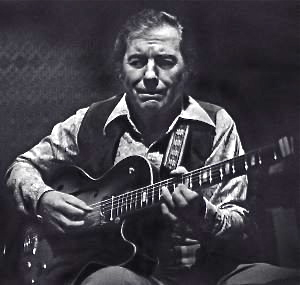 slideshow
Fleet-fingered and an ear for the saxophone, Chuck Wayne was one of the first guitarists to play bebop. He recorded with Joe Marsala and Dizzy Gillespie in January 1945 and then with the Gillespie Sextet in February on Groovin' High and Blue 'n' Boogie with Dexter Gordon. He also was in Woody Herman's First Herd in 1946, the George Shearing Quintet in 1949 and was Tony Bennett's musical director and accompanist in the 1950s, starting in 1954. Throughout his career, Wayne was known for his enormous taste and unusual picking style. Along the way, several of his songs were hijacked by other players. For example, his Sonny, written in tribute to trumpeter Sonny Berman but unpublished, was later lifted by Miles Davis, who renamed it Solar when he published it under his name. And Wayne's Butterfingers and Prospecting were incorrectly attributed to tenor saxophonist Zoot Sims. [Photo above of Chuck Wayne by William P. Gottlieb in the late 1940s]

Here's Wayne with the George Shearing Quintet, with Don Elliott on vibes, John Levy on bass and Denzil Best on drums, playing I'll Be Around in 1950...

Here's Wayne playing with Caesar DiMaruro on tenor saxophone, and Gary Mazzaroppi on bass at the “Dock of the Bay" in Staten Island, N.Y. playing Stella by Starlight...

Here's Wayne playing Along With Me on String Fever 1954...

And here's Wayne's Traveling from his 1980 album of the same name...