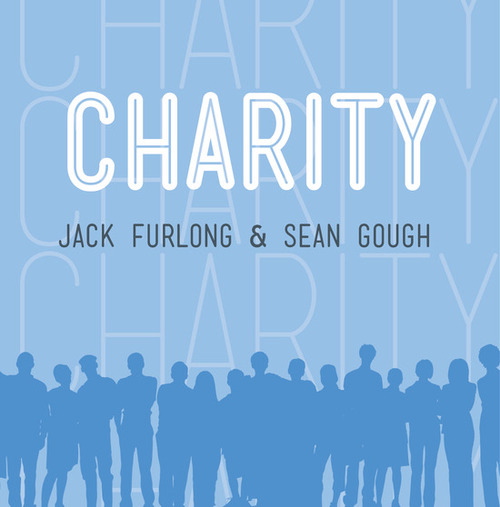 Coincidentally — not unlike John Coltrane 50 years ago—the songs are linked to a spiritual journey that transcends worship and ethnicity. “There was a different message that fueled us. We knew we were doing something good with the donations,” said Jack Furlong.

The purpose of Charity is to make a difference in the lives of people and pets. Furlong also wants to bring his music to churches, other venues, and live concerts to celebrate goodwill.

“Technically, all of the songs are utility hymns with the exception of Lamb of God—from the Mass of Remembrance,” the arranger said. Playing tenor sax throughout a project is a first for him, as he is known for his baritone work by trade. The duo concept of Jack Furlong and pianist Sean Gough is a new inspiration since performing energizing worship services/music ministry together at Lafayette college. Collectively, the great friends arranged the album with various ornaments in a trial and error effort.

Furlong and Gough concentrate on music that promotes a spiritual lifestyle. Ironically, there is a lot more freedom with this music, especially considering hymns typically reflect a set form from classical music.

At the height of the giving season, low prices make it easy to buy gifts in quantity, and benefit others by means of three charities at once. Up to 75% of your CHARITY purchase may be tax deductible, but be sure to check with your tax professional.

There’s something special about the conscientious and timely song selections (ie. ‘Amazing Grace’). “It’s hard to find people who do not like ‘On Eagle’s Wings,” Furlong said.

Charity features six (six) songs of improvisation over Christian hymns, with exception of Lamb of God. All are newly arranged by Furlong and Gough. The tracks range from an eerie chorale vibe to a hip, funk edge; up-tempo samba; 16-bar Blues with African-American roots; and 6/8 time with the feel of a waltz.

The new album is available for purchase on JackFurlong.com, iTunes, Amazon, CDBaby, Rhapsody, and more. To learn more about the multi-instrumentalist, including his full biography, visit his new website, JackFurlong.com.

Known as “the James Bond of jazz,” recording artist Jack Furlong is a self-confessed performer, composer, arranger, and educator. A baritone saxophonist by trade, he diversifies his sound and plays all types of saxophones, clarinets, and flute. With cool phrasing and a simple mel- odic approach, the critically acclaimed Furlong credits his style as heavily influenced by jazz pioneers: Gerry Mulligan, Miles Davis, Count Basie, and John Coltrane. Jack has shared the stage with notables like Phil Woods, Peter Nero, Jim McNeely and the late Mulgrew Miller.

Furlong’s professional career began in college, while honing his chops and composing for ensembles big and small. During this time, he gravitated toward the music of film, television, video games, and other media. Later, Jack graduated from William Paterson University with his M.M. in Composing and Arranging. Jack Furlong has recorded four CD’s to date and performs throughout the upper East Coast.

When not fully ensconced in music, Jack devotes time to his other passion: baseball. Not only is he a championship-winning coach and player, but also a state certified umpire. Furlong has started his own sports related charity, the OSIP Foundation (Outstanding Sportsmanship is Paramount), dedicated to victims of poor sportsmanship and awareness in all sporting events.