'Big New York' was large and in charge, and lead the band through a high octane and energetic performance... Be prepared to have a great time. An evening of fun, fellowship and wonderful music. —Tony "Doc" Hardy 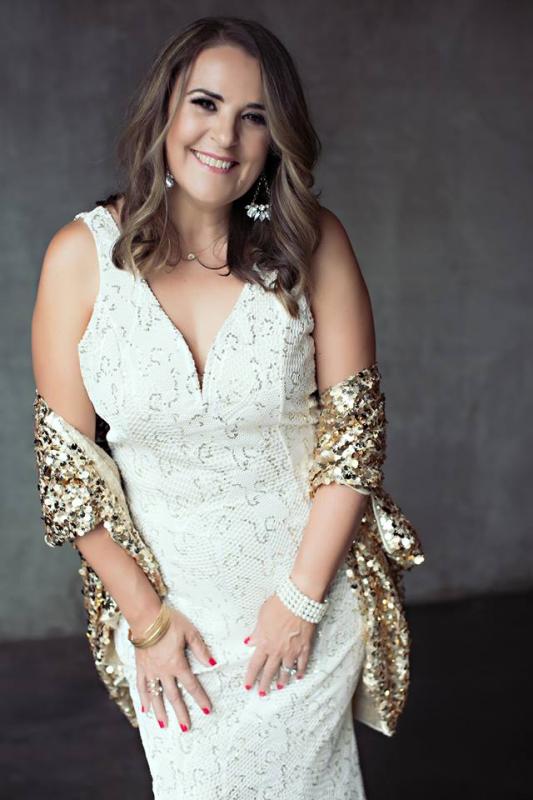 Titled They Call Me Big New York, the recording fuses the funk, R&B, jazz, rock, and Latin elements that de Mesones has embraced in his long and colorful career. The new material showcases a collaboration with West Coast singer/songwriter Debora Galan.

Eight instrumentalists deliver the epic signature sound of the bandleader. Hear potent drummer Carl Anderson and percussionist Curtis McCain and a searing horn section with Andrew King on trumpet. Craig Alstonplays tenor sax with Eddie Baccus on soprano, alto, and tenor. Enjoy well-defined melodies at the hands of Elliott Levine on piano and keys and Mike Gamble on acoustic and electric guitars. Galan contributes vocals and song lyrics to many pieces.

Galan and de Mesones discovered their shared Latin roots and musical interests through social media, yet their backgrounds vary immensely.

Based in San Diego, Debora Galan spent her early childhood in Madrid, where her mother and grandfather sang flamenco at huge family gatherings. She was educated in Washington, D.C. and became a widely acculturated teen, listening to singers from Streisand to Sade. After two decades as an R&B, jazz, praise, and pop singer, Galan jumped out of the box with her 2016 album, All About Love. It was her first as a leader and primary composer. Carving out new stylistic territory, the Latin jazz album was a clear reflection of her Spanish/Cuban heritage. She had reclaimed her full identity.

Produced by Emmy-winning Latin/world music producer Allan Phillips, All About Love features 10 originals exploring the various aspects of love, from enchantment to heartbreak. Critics have praised Galan’s stirring vocal renditions and the rich and rhythmic arrangements framing them. David Barron of KSDS 88.3 FM said, “Love it! Will be playing it often” and Jay Michaels of Magic 92.5 FM lauded her “beautiful angelic voice.”

Based in Woodbridge, Virginia, Christian de Mesones grew up in Brooklyn, New York in the Sunset Park/Bay Ridge area made famous by Saturday Night Fever. His father came from Ferreñafe, Peru and his mother from a musical family in Sofia, Bulgaria.

After graduating from the Bass Institute of Technology (now the Musician's Institute) in Hollywood, de Mesones played hard rock in Oahu and heavy metal with Twice Shy in the New York Metal scene. A move to Richmond expanded his musical palette. As part of the urban music scene there, he laid tracks for hip-hop artists, played R&B, Caribbean, Latin, and smooth jazz, gradually integrating his musical experiences.

Following a Capital Jazz Fest debut in 2006, his smooth jazz band Groove Skool drew standing-room-only crowds at live shows, and their album Limited Edition received international airplay. He has since independently released three popular singles. In 2018, Spirit rose to #12 with a bullet on the Mediabase Smooth Jazz chart.

De Mesones and Galan met last year via Facebook—at a time when each found the rich evidence of their Latino roots bubbling up in their respective songwriting. Last fall he became intrigued by social media posts about Galan’s 2018 East Coast shows. Sensing a co-creator and kindred spirit, he and wife Jennifer arranged to meet Galan at the Avalon Theatre in Easton, Maryland. Soon after, a collaboration was born. The musical fruit of their exchange constitutes a good-news story for Facebook and Galan feels that the platform is helping independent artists like her make valuable connections. New Music

With music by de Mesones and lyrics by Galan, the new work expresses their Hispanic identity in a big way, weaving a beautiful tapestry from many colorful threads. “Hispanica” is a stirring anthem for the immigrant. It speaks to Hispanics all over the world who may be experiencing hardship during these difficult times, whether enduring Hurricane Maria’s devastation of Puerto Rico or facing U.S. border and immigration policies. It also conveys a sense of pride and worth. Says de Mesones, “The song was created to uplift people with music that dances. It’s a hybrid Latin-Brazilian song with the bass fingerpicking chords of the melody to a mid-tempo samba- merengue beat and a salsa-flavored bass line.”

Upon hearing the music, Galan said, “It spoke to me about my culture and the immigration experience.” Her lyrics describe that experience of “coming with hopes and dreams and wanting to share the very best of what we bring as a culture.”

Inspired by the movie The Shape of Water, “Sweet Night” started with a groove which led Galan to imagine a hard conversation between two people. Although she heard the intended nostalgia in the music, she brought a hopeful quality with the kind of poignant, thoughtful lyrics she is known for.

Dedicated to building great sets, de Mesones loves to mesmerize an audience with colorful dynamic changes. A tribute to his father, the song “Don Pedro” begins with a bass fingerpicking introduction, then goes from ballad to bolero with a moving trumpet melody. It features a gargantuan showdown between Eddie Baccus, Jr. on alto sax and Dre King on trumpet, ending in an electrifying Hammond solo by Elliot Levine.

In addition to other collaborative pieces and new de Mesones tunes, the Blues Alley audience can look forward to hearing songs from Galan’s album All About Love. Watch the video for “Arms of Love”.