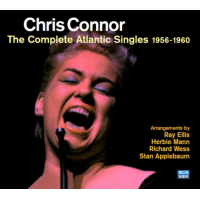 slideshow
Scrambling to avoid being caught short when the pop album format expanded in 1955 from 10 to 12 inches, Atlantic rapidly began adding singers to its artists rostet. In '56, the label signed Chris Connor after she left Bethlehem Records. She would go on to record 15 superb albums for Atlantic, including the remarkable Sings the George Gershwin Almanac of Song.

When I interviewed Chris in 2008, she told me she had full control of the song selection at Atlantic, often spending hours at Colony Records in New York's Brill Building running her fingers through boxes of sheet music to find great little-known songs.

Lesser known are her 45s for Atlantic. Now all 24 sides have been collected on Chris Connor: The Complete Atlantic Singles 1956-1960 (Blue Moon). By now, long-time JazzWax readers know that Chris is my favorite jazz singer. My preference takes nothing away from Ella Fitzgerald, June Christy, Sarah Vaughan, Anita O'Day, Dinah Washington, Julie London and plenty of others. I just find that Chris's voice and what she does with a song speak to me. I love her tissue-dry huskiness and hip approach on a melody.

When I told her so during our phone conversation back in 2008, she was taken aback. Chris never made it into the A-league on pop-jazz singers, and I'm sure she was painfully aware that she wasn't promoted as smartly or as aggressively as June Christy and other contemporaries.

Put on a recording of Chris singing a ballad and you find yourself with the hippest voice on vinyl. And if you get where she's coming from, you'll hear an extra dimension that transcends the narrative spelled out in a song's lyrics. It's a place where emotional suffering and joy intersect with reedy intonation and urbane cool. The songs seem almost whispered to you on a rainy night.

On this collection, Chris is featured with a glam collection of arrangements by Ray Ellis, Herbie Ellis, Richard Wess and Stan Applebaum. Not all of the singles are perfect, largely because arrangers seem to have been torn between Chris's unique approach and what Atlantic wanted to achieve on the radio and in jukeboxes. Songs that work best are Go 'Way From My Window, Past the Age of Innocence, Time Out for Tears, I Won't Cry Anymore, Misty, Invitation and Leiber and Stoller's I Only Want Some. And my favorite, Circus, which Art Blakey and the Jazz Messengers recorded in 1961. Many of these singles feature Percy Faith-like choirs found on many of Johnny Mathis's records of the period. That was Atlantic's doing.

Chris Connor died in 2009. You'll find Part 1 of my five-part interview with her in 2008 here. To find subsequent parts, simply scroll up to the top of the post and look above the red date, where you'll see a link.