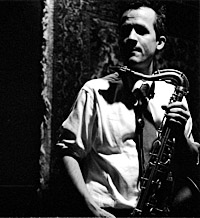 slideshow
When the names of great tenor saxophonists are tossed around, the chain of succession generally runs like this: Coleman Hawkins, Lester Young, Dexter Gordon, Sonny Rollins and John Coltrane. All, of course, were reed titans, and Sonny still is. A half-step below this esteemed group is a second tier of greats that include Don Byas, Wardell Gray, Stan Getz, Zoot Sims, Al Cohn, Frank Wess, Frank Foster, Hank Mobley, Eddie “Lockjaw" Davis and Wayne Shorter. Typically left out is Lucky Thompson [pictured], who was an exceptional musician in every way. Fortunately, he hasn't been completely forgotten. Saxophonist Chris Byars has just released Lucky Strikes Again (Steeplechase), a superb album on which his octet covers 10 Thompson compositions and arrangements.

In an age when there was no shortage of saxophone kings, Thompson (1924-2005) managed to carve out a place for himself. He could sight read music brilliantly, he could blow soft and strong, he could compose and he could arrange. In the '40s, Thompson's many talents always landed him in the most challenging orchestras. The list includes bands led by Count Basie, Benny Carter, Boyd Raeburn, Ralph Burns, Louis Armstrong and Charlie Parker.

Lucky's compositions, like those by Tadd Dameron, were sensual and aggressive. They offered fresh modern voicings as well as powerful, exciting builds and sighing resolutions. His Lucky Thompson Featuring Oscar Pettiford from 1956 (later issued on Impulse as Tricotism) is a perfect example of Thompson's sophisticated touch. The same goes for his arrangements for the Oscar Pettiford Orchestra albums of the same year.

Like Thompson, Chris Byars never approaches projects halfway. Some years back, Byars had heard an NDR Jazz Workshop radio concert by Thompson in Hamburg, Germany from 1961. For the broadcast, Thompson had arranged his songs for an octet.

When Byars [pictured] was unable to locate a score or parts for the Thompson arrangements, he painstakingly transcribed Old Reliable, Notorious Love, Two Steps Out, Down the Stretch, Could I Meet you Later? and Another Whirl.

As for Passionately Yours and Munsoon, Thompson had recorded those with a quartet in 1965 and 1973, respectively. So Byars wrote charts that expended those dates for an octet. Just One More Chance is a standard by Arthur Johnson that Thompson had recorded in 1947 on his first leadership session. The date featured Neal Hefti, Benny Carter, Bob Lawson, Dodo Marmarosa, Barney Kessel, Red Callender and Lee Young.

Two more Lucky-like tracks were added—Tiptop by the octet's baritone saxophonist Mark Lopeman and Byars' own Minik Koosh ("Little Bird" in Turkish). As Byars says in Mark Garner's liner notes for the CD: “I knew there would be only one shot for me at the Lucky Thompson legacy, and this was it."

On Lucky Strikes Again, Byars not only brings fresh life and excitement to Thompson's originals but also heroically rescues Thompson's octet arrangements from obscurity. But Byars succeeds here in another way: He has revived interest in Thompson, a musician who died in near obscurity (go here). I plan to revisit many of my Thompson albums as a result of this CD. I think many Byars fans will do the same.

JazzWax tracks: Lucky Strikes Again: Chris Byars and His Octet Plays the Music of Lucky Thompson is available at iTunes and here.