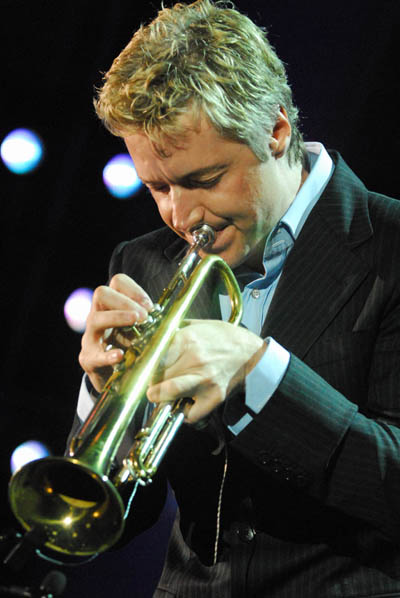 Sponsored by CareFusion, a leading global medical device company, and produced by George Wein's New Festival Productions, LLC, the festival takes over New York June 17 - 26 with 47 concerts at 22 venues across four boroughs. The concert is presented in partnership with The Bowery Presents and Carnegie Hall.

Botti is also scheduled to perform at the CareFusion Newport Jazz Festival at Fort Adams State Park in Newport, RI, on Sunday, August 8.

Since the release of his 2004 critically acclaimed CD When I Fall In Love, trumpeter Chris Botti has become the largest selling American instrumental artist. His success has crossed over to audiences usually reserved for pop music and his ongoing association with PBS has led to four #1 Jazz Albums, as well as multiple Gold, Platinum & Grammy Awards. Over the past three decades, Chris has recorded and performed with the best in music, including Frank Sinatra, Sting, Josh Groban, Michael Buble, Paul Simon, Joni Mitchell, John Mayer, Andrea Bocelli, Joshua Bell and Aerosmith's own Steven Tyler. Hitting the road for more than 250 days per year, Chris and his incredible band have performed with many of the finest symphonies, at some of the world's most prestigious venues, including performances at the World Series and Nobel Peace Prize Ceremony. People Magazine voted Chris one of the 50 Most Beautiful People.

A 16-year-old musical prodigy from Hampstead, Quebec, Decca recording star Nikki Yanofsky captured the hearts of more than 100,000 jazz fans when she made her debut at the 2006 Montreal International Jazz Festival. Since then, she has gone on to land world-wide bookings and release chart-topping records, including her first studio album, Nikki, which features new arrangements of jazz classics and some of her own original music. Nikki was the youngest singer ever on a Verve Records release when she recorded “Airmail Special" for the Ella Fitzgerald tribute, We All Love Ella: Celebrating the First Lady of Song. She also recorded “Stompin' at the Savoy" with Herbie Hancock and Will.i.am for Kareem Abdul-Jabbar's audio book, On the Shoulders of Giants and performed at Carnegie Hall, The Kennedy Center and Avery Fisher Hall with composer/conductor, Marvin Hamlisch. In addition, she was a featured artist at the 2010 Olympic and Paralympic Winter Games held in Vancouver.

Tickets ($40 - $90) for An Evening with Chris Botti and other CareFusion Jazz Festival New York concerts scheduled at Carnegie Hall are available at carnegiehall.org or at CarnegieCharge at (212) 247-7800.

Tickets and information on the CareFusion Newport Jazz Festival are available at newportjazzfest.net and ticketmaster.com.

The Buckingham Hotel, located at 101 West 57th Street in Manhattan, is the host hotel of the CareFusion Jazz Festival New York. For reservations, call (212) 246-1500, extension 3201; for more information, visit buckinghamhotel.com.