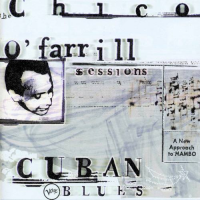 slideshow
Looking back, 1951 and '52 were groundbreaking years for jazz. Bebop was still lingering, cool jazz had already begun in '49, the R&B-influenced hard bop was just emerging and so was the relaxed sound of West Coast jazz. But these years also were important for Latin jazz and the dominant role played by Chico O'Farrill in its development.

Up until 1951, the sound of Latin jazz was dominated by Machito and His Afro Cubans (above), a group that formed in New York in 1940. Dizzy Gillespie also played a crucial role in Latin-jazz's evolution in the 1940s with his recordings of A Night in Tunisia, Tin Tin Deo and Mateca. By 1951, the mambo of Perez Prado awakened a new dance craze, and the demand for the music at New York's dance halls spiked. The surge meant more work for leading jazz musicians who took the gigs for extra income.

As jazz artists such as Eddie Bert, Roy Eldridge, Danny Bank and Flip Phillips were acclimating to the intricacies of Latin music, Latin arranger O'Farrill was crossing over with ambitious orchestral jazz works and dance-band music. Born in 1921 in Havana, Cuba, O'Farrill's mother was Cuban and his father was an Irish attorney. O'Farrill's parents hoped Chico would become a lawyer, with expectations that he'd become a partner in his father's firm. O'Farrill was fine with that, until his parents sent him to the States in the '30s to a Georgia military academy.

There, O'Farrill was exposed to brass-driven bebop. He took up the trumpet, and by the time he returned to Cuba, he had developed his chops in the military school's dance band. The law was out and jazz was in. In Cuba, O'Farrill came under the tutelage of conductor Felix Guerrero. O'Farrill quickly became versed in the orchestration and musical composition. By 1945, he was arranging for a Cuban band called Orquestra Bellemar.

But the failure of a club where he worked sent O'Farrill back to the States, this time to seek his fortune. At first, he was determined to become a theater player, but he soon was discovered by Dizzy Gillespie's arranger Gil Fuller, who hired him as a ghostwriter. O'Farrill was so deft as a modernist arranger that Benny Goodman hired him in '48 to write for his Capitol Records bebop band. O'Farrill's charts for Goodman included Chico's Bop, Undercurrent Blues and Shishkabop.

By 1950, producer Norman Granz hired O'Farrill to record for his Clef label as a leader. The results remain stunning. The recordings were way ahead of their time. O'Farrill's first arrangement for Granz was his Afro-Cuban Suite, an impressive orchestral work recorded by Machito that fused jazz and Cuban rhythms. In June '51, O'Farrill recorded a 10-inch LP for Clef called Afro-Cuban, which was an extension of O'Farrill's bold Afro-Cuban Suite.

The big crossover came in August 1951, when O'Farrill began recording Chico O'Farrill Jazz, a 10-inch album with jazz orchestral arrangements that will make your arm hairs stand on end. The ferocious complexity of the scores and rhythms were handled by an exemplary band.

O'Farrill on Clef paved the way for modern Latin-jazz orchestral arranging. Early Latin-jazz masterpieces that followed included Bill Holman's Have-a-Havana (1953) for Stan Kenton, Manteca: Dizzy Gillespie and His Orchestra, arranged by O'Farrill (1954) and Johnny Richards's Cuban Fire (1956), also for Kenton. While Machito and Dizzy Gillespie certainly began forging a fusion of Latin and jazz in the late 1940s, before O'Farrill's arrival, the result was largely a jazz outcome with conga and bongo along for flavor. Not until O'Farrill begins recording for Clef do we hear a more modernist approach to Latin jazz, where both halves of the equation received equal representation.

JazzWax clips: So how good was Chico O'Farrill as a jazz arranger in 1951 and '52? Dig these and the tigers who played what he wrote:

Here's Avocados, a wonderful blend of Latin and jazz in June 1951...

Here's Last One, a drop-dead bop-influenced arrangement on Chico O'Farrill Jazz in August 1951, with Roy Eldridge's trumpet on top...