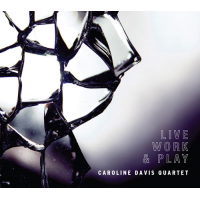 Caroline Davis's star has been rising in Chicago. She’s been called “one of the city’s strongest and most exciting jazz saxophonists” (Chicago Reader) whose “musical development over the last three years has been nothing short of startling” (Chicago Music).

On November 6, Davis brings her music to a national audience and beyond with the release of her powerful and compelling debut album, Live Work & Play (Ears & Eyes Records). Featuring her quartet of Mike Allemana (guitar), Matt Ferguson (bass), and Jeremy Cunningham (drums), the CD is an exploration of odd time signatures and bluesy melodies that encourage constant dialogue and defy expectations.

“My view of improvisation blossomed when I moved to Chicago [in 2004],” states Davis, who participated in late-night jam sessions at the New Apartment Lounge with Von Freeman while studying for a doctorate in music cognition at Northwestern University. Allemana, a longtime Freeman sideman, was so impressed with her playing that he joined her band, as did Freeman’s bassist Matt Ferguson. “Mike suggests things that expand my harmonic vocabulary,” says Davis. “He also is interested in more challenging rhythmic concepts, so my ideas of conventional rhythm and meter have been expanded.”

Davis’s distinctive originals predominate, among them “Dionysus” with its airy minimalism and artful bridging of musical sections; the lead track “Kowtow,” written in the key of E to fulfill the literal Chinese act of “paying respect by kneeling and bowing” in the face of a musical challenge; and a mini-suite (“Old Rims,” “Shiny Rims,” “Real Rims”) inspired by a young autistic man she met in New Orleans whose specialty is identifying the make and model of different car rims. Also included are Allemana’s arrangement of Billy Strayhorn’s indelible “Blood Count” and a free-style reading of Charlie Parker’s “Cheryl.”

Born in Singapore in 1981 to European parents (her father was a British engineer, her mother a Swedish actor), Caroline Davis was raised in Atlanta and Dallas. She played saxophone in her junior high band and was introduced to jazz by her high school band director. After acquiring both a Bachelor of Music in Jazz and a Bachelor of Science in Psychology at the University of Texas at Arlington, she bridged those areas in acquiring, in 2010, a Ph.D. in Music Cognition at Northwestern University in Evanston.

Davis’s dissertation looked at the intricate collaborations musicians form in a scene, and related those connections to the ways they hear music. “I try to let all that stuff go when I play,” she says with a laugh. “The more you let thoughts go and just listen, the better you play.”

Davis, who counts Wayne Shorter, Charlie Parker, and Chicago native Lee Konitz among her prime musical influences, received a Down Beat outstanding soloist award in 2006 and was selected as one of five young jazz musicians to play with Sisters in Jazz, a program administered by the now-defunct International Association for Jazz Education devoted to the mentorship of women in jazz. In 2011, she played at the Kennedy Center for the Performing Arts in Washington, DC as part of the Betty Carter Jazz Ahead Program.

Like so many local standout players before her, Davis has not restricted herself to any one style or genre. She has teamed with bassist Matthew Golombisky and drummer Quin Kirchner in the free improvising trio Pedway (which recently recorded its second album), and regularly performs in hip-hop, reggae, and R&B outfits. She and her quartet performed at the Chicago Jazz Festival last month, and the release of Live Work & Play is sure to bring new opportunities for this deeply gifted artist to present her music. “I’m looking forward to seeing what listeners think of our record,” says Davis. “It’s as honest as we could’ve made it.”